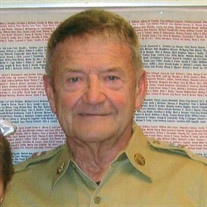 James Wilson Waddell Jr, age 81, passed away unexpectedly of pancreatitis on Wednesday, Dec 23, 2020 at NOVANT Health Haymarket Medical Center, Haymarket, VA He was born on October 21, 1939 in Fauquier County, VA to the late James Wilson and Fannie Marshall (Wines) Waddell. Survivors include his high school sweetheart/loving wife of 61 years Gene Carol Moore Waddell of Nokesville, VA; two sons: Stephen Waddell and wife Laurel; Jack Waddell and wife Dorothy all of Suffolk, VA; two grandchildren: Taylor Waddell of VA Beach, VA and Anna Waddell of Suffolk, Va. and one sister: Barbara Gray and husband William Gray of Winchester, Va. He lived on many dairy farms in The Plains, Manassas and Gainesville areas in his younger days. He was a graduate of Osbourn High School in Manassas, VA and a proud member of the great class of' 59. During his high school years he was co captain of the JV football team and also played 1st base on the varsity baseball team. He was also a student school bus driver in the 11th and 12th grades (an unheard of thing now). James served in the US Army and was a proud veteran. While in the service he was on the sharpshooter rifle team at Fort Lewis, Washington. After military service he worked many years building houses, and as a superintendent for Richmarr Construction Co and after that he was always being promoted to the boss instantly on any new job. He had his own home improvement business, Quality Home Improvements, for years finally doing part time work being semi retired. He was most proud of his sons and he could always be found in the stands cheering them and his nieces on, or on the golf course, showing his style, or mowing the grass on slow speed. Burial of his ashes will be at Middleburg Memorial Cemetery, Middleburg, VA. The family will have a Celebration of James' Life once COVID restrictions are lifted. In lieu of flowers please donate to the Haymarket Food Pantry, if you desire. Condolences may be sent to: www.piercefh.com

The family of James Wilson Waddell Jr. created this Life Tributes page to make it easy to share your memories.