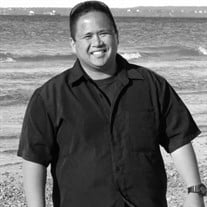 Jimmy Schultz (Albert James Base) was born in New York, NY on November 20, 1970, to Editha Abaya, a traveling nurse from the Philippines. She entrusted his care to family friend, Donald Schultz of Saginaw, Michigan. Over the years, he affectionately became known as Jimmy and as an adult changed his name to James Alexandre Schultz. Jimmy attended St. Thomas Aquinas for grade school and Dwight D. Eisenhower High School, both in Saginaw. He briefly attended Michigan State University, before returning home to work a variety of jobs including managing State Street Produce and Sempliner’s Tuxedos in Bay City, Michigan. He married Cindy Schultz (nee Wiese) in 1992. Jimmy went on to work at a local Christian television station and at First Assembly of God church, where he was the youth minister for several years. He was lovingly known as Pastor Jimmy, or PJ, during this time. After leaving the church, he worked for The Dow Chemical Company for a year before taking a position with XO Communications. He decided to return to school. He earned a Bachelor’s Degree in Political Science and Public Administration from Saginaw Valley State University in 2002. He and Cindy had three children together. Jim began earnestly following his long-held dream of working in Law Enforcement. He began working for the Saginaw Police Department as a Cadet. He then began pursuing a career in federal law enforcement and was hired by the United States Secret Service (USSS) Uniformed Division in 2003 to serve as an officer in Washington, DC. In 2004, he was hired as a Special Agent and assigned to the Field Office in Milwaukee, Wisconsin. After 8 years, he was transferred back to Washington, DC where he began protection assignments in the Dignitary Protection Division and then the Vice Presidential Protection Division. At the conclusion of his protection assignments, Jimmy served at USSS Headquarters in the Staffing and Logistics Office ‘War Room,’ where he was promoted to the position of Assistant Special Agent in Charge, responsible for ensuring that staffing needs for all USSS protection were met. Jimmy was selected to attend the Eisenhower School at the National Defense University, where he was pursuing a Master’s Degree at the time of his passing. Jim had a unique ability to connect with people and he made many close friends in each of the places he lived and worked. His intelligence, wit, and fun personality will be greatly missed. He is survived by his three children, Casey (age 20), Cassidy (age 18), and Caitlyn (age 14). He is also survived by his brother Gary Schultz of Westmont, IL, niece Katie Schultz of Chicago, IL, sister-in-law Nancy Chang Schultz of Chicago, IL, nephew Christopher Schultz of Chico, CA, sister Rosalie Hasnat of Los Angeles, CA, brother-in-law Sayeed Hasnat and niece Alexa Hasnat of Los Angeles, CA, brothers Joseph D'Quilope and Erick D’Quilope of San Diego, CA, nephew Jonathan D’Quilope, of Helena, MT, and his birth father, Racine Base of the Philippines.

Jimmy Schultz (Albert James Base) was born in New York, NY on November 20, 1970, to Editha Abaya, a traveling nurse from the Philippines. She entrusted his care to family friend, Donald Schultz of Saginaw, Michigan. Over the years, he affectionately... View Obituary & Service Information

The family of James Alexandre Schultz created this Life Tributes page to make it easy to share your memories.

Jimmy Schultz (Albert James Base) was born in New York, NY on...

Send flowers to the Schultz family.