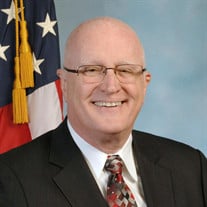 On Saturday, February 26, 2022, James Loudermilk II, of Manassas, VA, loving husband and devoted father of three, passed away at age 74. Jim was born in Fort Worth, TX to James and Mary Alice Loudermilk. He received Bachelor’s and Master’s Degrees in Mathematics from the University of Dayton and the Degree of Applied Scientist in Communications Engineering from The George Washington University. After completing two years of active duty in the US Army he transitioned to the Army Reserve and began his post military career. He ultimately retired from the Army Reserve at the rank of Lieutenant Colonel. Following multiple roles in the private sector, he became an expert in the field of biometrics, holding many positions within the Federal Bureau of Investigation, including chief engineer and deputy program manager for development of the Integrated Automated Fingerprint Identification System (IAFIS). He went on to share his knowledge of biometrics and other human identification technology as a subject matter expert, giving lectures in venues both foreign and domestic and providing advice directly to various organizations as an independent consultant. He was also an active and longtime Scottish Rite Mason, achieving the distinction of a 33-degree Wise Master, and current Master of Kemper-Macon Ware Lodge No.64. Jim is survived by his loving wife Rita of 49 years, brother Charles Loudermilk (Lanette), daughter Margaret Loudermilk (Alan Bester), son James Loudermilk III (Jennifer) and son Edward Loudermilk. He is also survived by his two favorite grandchildren, James Loudermilk IV and Samantha Bester, as well as his nieces Kristen Loudermilk and Lindsey Perdue (John). Jim was an avid reader and lifelong learner. He was a brilliant man and a master of public speaking. He was also humble, generous, kind, and devoted to his family. “He was a man. Take him for all in all, I shall not look upon his like again” (Shakespeare, Hamlet, 1.2. 188-189). Visitation will be from 10am to 12pm and the funeral for Jim will be at 12pm at Pierce Funeral Home, 9609 Center St, Manassas, VA 20110 on Friday, March 18th. Jim will be laid to rest at Quantico National Cemetery at 2pm on Friday, March 18th. There will be a reception to follow from 3-5pm at Manasseh Lodge No.182, 9810 Cockrell Rd, Manassas, VA 20110. Memorial donations in lieu of flowers can be made to the Brain Injury Association of America (https://www.biausa.org/support/gifts-in-memory).

On Saturday, February 26, 2022, James Loudermilk II, of Manassas, VA, loving husband and devoted father of three, passed away at age 74. Jim was born in Fort Worth, TX to James and Mary Alice Loudermilk. He received Bachelor&#8217;s and Master&#8217;s... View Obituary & Service Information

The family of James Arville Loudermilk II created this Life Tributes page to make it easy to share your memories.

Send flowers to the Loudermilk family.