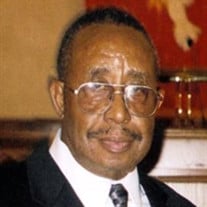 Deacon James Levell Jolly, also known by “Levi”, “Bubba”, and “Papa” began his journey through life on February 13, 1932 in Madison County, Alabama, where he was born the third child to the late Charlie Houston Jolly and Ida Rogers Jolly. Two brothers Charles Jolly and Curtis Jolly and three sisters Edna Woodard, Hattie Sledge, and Martha Knox preceded him in death. On Monday, October 11, 2021 after a lengthy illness, James Levell Jolly peacefully passed away at home with his loving family by his side. James was educated in the Madison County Public School System in Huntsville, Alabama. He served in the U.S. Army and U.S. Army Reserve for a number of years. After leaving the military, James was employed with IBM and retired after 25 years of employment. James was a member of Mount Olive Baptist Church, Centreville, Virginia under the leadership of The Reverend Doctor Eugene Johnson. He faithfully served until his health began to fail as a member of the Deacon Board, Family Life Leader, Prayer Warrior, Usher Board, Men’s Ministry, and the Golden Saints Ministry. On January 15, 1957, James married Earline Bentley, who preceded him in death. From this union, three children were born. James enjoyed gardening, which many of his friends, co-workers and neighbors could attest to being recipients of his many homegrown fruits and vegetables. He also enjoyed barbequing, fishing and traveling back home to visit his family and many friends. Precious memories will be cherished by daughters: Sharon Jackson of Manassas Park, VA and Janet Spencer of Manassas, VA; son: Michael Jolly of Manassas, VA; three grandchildren: James Jackson of Manassas Park, VA; Danelle Spencer of Fairfax, VA, Bryton Spencer of Stafford, VA; brother: Joseph Jolly (Mary) of Austin, TX; sisters-in law: Maxine Jolly of Nashville, TN, Vera Jolly of Greensboro, NC, Ruth Bentley of Richmond, VA, Louise Gregory of Chicago, IL, Odell Bentley, Vera Bentley, and Shirley Clemons, all of Huntsville, AL; brother-in-law: Andrew Parker of Huntsville, AL and a host of nieces, nephews, relatives and friends. “Our joys will be greater, our love will be deeper, our life will be fuller because we shared your moment.” Author unknown It is requested that masks be worn at all times and that social distancing be practiced.

The family of James Levell Jolly created this Life Tributes page to make it easy to share your memories.

Send flowers to the Jolly family.