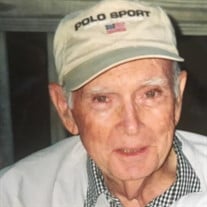 Mr. James Monroe Davis, Jr., age 96, was a resident of The Woodlands in Fairfax, VA and died on March 9, 2021. A son of the late James Monroe Davis and Fannie Wall Davis, he was born on November 23, 1924, and grew up on his family’s farm in Yadkin County, North Carolina. His plan was not to farm, so he earned a graduate degree in agriculture at NC State and served farmers across the country at his post as deputy director at the Department of Agriculture in Washington, D C. His education was interrupted by World War II when he enlisted in the US Army and served in the Pacific Signal Corps. While teaching agriculture at Flat Rock High School in Mt. Airy, NC he fell in love with a fellow teacher, Myrtle Marie Timmons and married her on Dec. 16, 1950. They celebrated 70 years of marriage last year. He was a man who loved his God and his family well. Mr. Davis is preceded in death by his parents, and sisters, Doris Huff and Beulah Land. He is survived by his wife Myrtle Davis, and four children: Karen Montgomery (Greg) of Harrisonburg, VA, James M. Davis III (RoseMary) of Manassas, VA, Susan Felts (Exie) of Leesburg, VA, and Mary Jane Davis of Manassas, VA. eight grandchildren; Katie Robinson (Derek), Jessie Stewart (Will), James Emmett Montgomery, Will Montgomery, James M. Davis IV (Ali), Kristen DuPrey (Ian), Eugene Felts (Dina), John Felts (Abby); Eleven great grandchildren; Davis, James, and Elizabeth Robinson, Rowlyn DuPrey, Eitan, Eli, Kobe, Hannah and Dottie Felts, Remington, and Vivienne Felts. A celebration of his life will be held on March 27, 2021 at 10:00 at Chapel Springs Church, Manassas, VA where he was a faithful member for many years. A viewing will take place at 9:00. In lieu of flowers, memorial contributions may be made to Chapel Springs Church. 11500 New Life Way, Bristow, VA 20136. Condolences may be sent to Pierce Funeral Home website.

The family of James Monroe Davis Jr. created this Life Tributes page to make it easy to share your memories.

Send flowers to the Davis family.