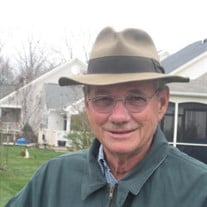 Jack Garland Wolf, 80, a resident of Gainesville, Virginia, died August 20th at his home in Heritage Hunt after a struggle with lung disease. Born and raised in Wetumka, Oklahoma, Jack grew up in farming, but enlisted in the Army at the age of 18 in 1960, the beginning of a 33-year military career during which he was selected for Officer Candidate School, obtained a graduate degree in history from the University of Kansas, attended the US Army War College in Carlisle, Pennsylvania, and achieved the rank of colonel. More listener than talker, Jack did not freely offer his opinions, but had a quick wit and incisive analysis for anyone who asked and could draw on a life of experiences that ran from breaking horses to inspecting missiles. He traveled the world serving his country, spending nearly half his military career overseas, with a tour in Vietnam and with postings in Korea, Turkey and Colombia, from which he traveled throughout South America. During one of several postings in Germany, in Auschaffenberg, the Oklahoma Army officer met and fell in love with a Californian, Elizabeth Cox (Libby), who survives him after a marriage of 47 years. He was a battery commander during his service in Vietnam, for which he was awarded the Bronze Star, and commanded a Field Artillery Lance Missile battalion in Wiesbaden, Germany, part of NATO forces protecting central Europe. Later, he served as Chief of Staff , VII Corps Artillery, as the US removed its nuclear missiles from Europe and was Chief of Staff of Operation Provide Comfort, which helped Kurds in Northern Iraq in 1991. Jack embraced retirement, moving to Modesto, California, where he filled his time golfing and backpacking, with long trips throughout the Sierra Nevada mountains and a rim-to-rim Grand Canyon hike with a tight group of friends. He spent six summers as a production manager at a large tomato cannery, and took that knowledge on a USAID-funded mission to Kyrgyzstan. He was also a regional manager for a summer educational program for at-risk teenagers. Family brought Jack back to Virginia, where he’d lived during his military career, and he spent his final fourteen years enjoying golf, poker, bird watching off his back porch, and doting over his grandson and four granddaughters, who knew him as “Jack-Pa.” His kids and grandkids have fond memories of him frying turkeys, smoking turkeys, arguing about turkeys, flying kites, and teaching them the proper way to deal a hand of poker. He leaves behind his wife Libby; his sons Jacob, a retired U.S. Army Lieutenant Colonel, and Zachary, a journalist at CNN, both of Alexandria, Virginia; daughters-in-law Sarah (DeLong) and Emily Carlsen; grandson Phineas; and granddaughters Nina, Eleanor, Britta and Evelyn. He also leaves behind three sisters, Linda King of Ada, OK, Wanda Nelson of Oklahoma City, Ok, and Betty Wolf of South Carolina. He will be interred at Arlington National Cemetery.

Jack Garland Wolf, 80, a resident of Gainesville, Virginia, died August 20th at his home in Heritage Hunt after a struggle with lung disease. Born and raised in Wetumka, Oklahoma, Jack grew up in farming, but enlisted in the Army at the age... View Obituary & Service Information

The family of Jack Garland Wolf created this Life Tributes page to make it easy to share your memories.

Customized sympathy cards. Mailed for you.