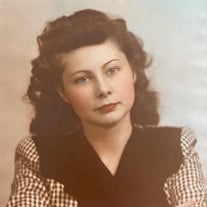 Ina Claire Parsons January 20,1926 - July 15, 2021 Ina Claire Parsons, 95, passed away peacefully on July 15, 2021 in Falls Church, VA. Claire,(how she was known by her friends and family), was born in Washington, DC to Cyrus Thompson and Elizabeth Adams Thompson on January 20, 1926. She spent all of her childhood in Washington, DC. During high school, she began working for the Federal Government. On April 11, 1947, she married James Roy Parsons of Bailey's Crossroads, VA. After a few years of marriage, they moved out of the city to Annandale, Virginia where she had two children Jim and Faith. While the kids were young she worked as a crossing guard for the schools. Once the children were old enough, she went back to working for the Federal Government. She found herself working at the Pentagon where she had her favorite job, helping to schedule the aerial teams flights (Blue Angels). In total, she worked 20 years for the Federal Government and continued to work for Fairfax County government for another 10 plus years. When she retired in her sixties, she enjoyed traveling and was able to take a number of cruises and even a trip to Italy. Claire moved several times during her life but always stayed within Fairfax County. With each move she stayed involved with the local community and church. Later in life she moved to the Greenspring Community in Springfield, VA. She was involved in a variety of clubs and activities and especially enjoyed bingo. She would brag to all the staff about her kids and grandchildren whenever they would visit. In 2013 she was interviewed by a high school student and shared the following: “It’s my experience listening to other people talk, that people work all their lives waiting for when they can retire or have money to do everything. Then they realize their health isn’t good. Live your life to the fullest, take advantage of it!” Claire is survived by her two sisters, Vilma Hanes and Linda Whiteheart (Richard); her two children James Parsons and Faith Perkins (John Perkins); 5 grandchildren Sherry Brooks (Gary Brooks), Jack Perkins (Jenn Hess), Jennifer Taxson (Larry Taxson), Michael Perkins, Kristen Isajan (Karo Isajan); and 5 great grandchildren Lily Perkins, Steven Taxson, Peter Taxson, Brenna Brooks and Colby Brooks. A graveside service will be held on Saturday July 31, 2021 at 11:00 am at Flint Hill Cemetery 2845 Chain Bridge Road Vienna, VA for family and friends. In lieu of flowers, the family asks that donations be made to Capital Caring -Helping those in need of compassionate care (link to donation site) https://secure2.convio.net/cc1/site/Donation2?df_id=1800&mfc_pref=T&1800.donation=form

The family of Ina Claire Parsons created this Life Tributes page to make it easy to share your memories.

Send flowers to the Parsons family.