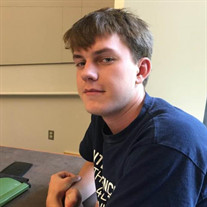 With deepest sorrow, we announce that Ian Michael Butler, age 20, our beloved son, brother, family member and friend accidentally passed away on January 4, 2021. Ian will be missed everyday by his mother Maureen Fannin, father Michael Butler, brother Owen, his grandmother Wanda, his loving aunts Lynn, Colleen, Ellen and Sue, his uncles John, Dave, Keith and Todd, his cousins Asa, Flynn, Rebecca, Scott, and Melissa, and all his friends. He is preceded in death by grandfathers Les Fannin, Charles Butler, and Grandmother Marilyn Kuehn Fannin. He has angels to watch over him. Although only 20 at the time of his death, Ian affected many people in his lifetime. He had a warm smile and beautiful blue eyes. Ian was enormously funny with a keen intellect. A mother would say he was a gifted debater, but others would say he just loved to argue - often carrying a provocative message. At first glance, his style appeared relaxed and unassuming, but the tee-shirts he wore often revealed his strongly held beliefs in civil rights, humanity, kindness - and a few boasting that he was usually right. Ian was deeply moved by music and started writing lyrics at ten years of age and was an aspiring musician/rap artist. He self-produced his music under the name Aydrian with best friend Josh Tinsley, who recognized his talent and encouraged Ian to start recording and take his music more seriously. We are profoundly grateful to have these recordings and plan to share them with the world. Ian and Josh spent many hours together mixing beats, writing lyrics, and bringing to life Ian’s dream of giving listeners a cinematic experience and, of course, go crazy and rage. Ian often said he did not want “no bystanders” at his concert. His brother Owen said this was a well-known quote from Travis Scott - Ian’s main musical influence. Everyone who listened to his music spoke of his amazing lyrical ability, musicality, and his well-crafted songs. At the time of his death, he had over 100 songs finished and unfinished. Ian loved many things in addition to music. He treasured his family and friends, and we all miss having those long and engaging conversations with Ian on any and every topic. He was an introspective and deep thinker who often thought about the world and his place in it. His Father recalls many discussions about the universe, metaphysics, politics, religion and many more topics of interest to Ian. His Mother recalls many hours and days talking about his music, relationships, life struggles, and those daily interactions of watching him navigate life and hearing him rap upstairs in his room. Ian also loved animals and was kind and loving to them. He loved his two adopted orange/tabby cats he named Frank and Sargon. They were strays in the neighborhood, and we often called him the cat whisperer since he was able to sooth Sargon’s often prickly disposition. He also loved hiking with his father in the Blue Ridge Mountains (especially Old Rag Mountain), playing video games, watching YouTube, Burger King, Pho, reading, writing, anime, paintball, watching movies, and podcasts. Our beloved son Ian will be deeply missed. It is hard to imagine life without him. The family held a private viewing on January 10th, and a celebration of life will be announced later where all can gather to share memories and their love for Ian. “Not all who wander are lost. I stop wandering when the music stops.” Ian Butler

The family of Ian Michael Butler created this Life Tributes page to make it easy to share your memories.

With deepest sorrow, we announce that Ian Michael Butler, age...

Send flowers to the Butler family.