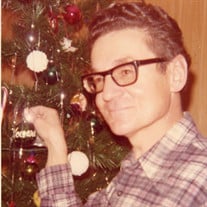 Howard Russell Smith, age 93, of Gainesville, VA died on July 4, 2021, at Novant Health Haymarket Medical Center in Haymarket, VA. He was born on February 9, 1928, in Prince William County, the son of Mode and Leafy Smith. Howard graduated from the Virginia School for the Deaf and the Blind in Staunton, VA with honors in 1950. After graduation he worked for the Fauquier Democrat, where he made many friends, some of whom learned sign language. Howard enjoyed working alongside Ervin Garrett, Ralph Swain, Alan Poe, and Trudy Trumbo. After many years he moved to Annandale, VA where he worked for the Evening Star until he retired. Howard married his high school sweetheart, Helen Webb in 1954. He was predeceased by his daughter Karen; one brother Theodore (Ted) Smith; and three sisters, Frances Hunsberger, Evelyn Lunsford, and Marjorie Smith. He is survived by his wife Helen, his sister Jean Mountjoy, his nephew Ronnie Lunsford, his caregivers, and a host of nieces and nephews that Howard cared very much for. Family and friends will gather for a Visitation on Thursday, July 29, 2021, from 6:00-8:00 PM at Pierce Funeral Home, 9609 Center St. Manassas, VA 20110.

The family of Howard Russell Smith created this Life Tributes page to make it easy to share your memories.

Send flowers to the Smith family.