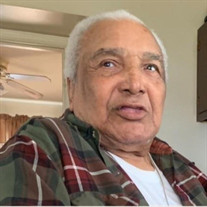 Herman Cary Lee Sr. departed this life on February 14, 2022, at Capital Caring Center in Aldie, VA. He was born February 28, 1938, to the late Alvester Lee Neals of Washington D.C. Herman received his education in the Fairfax County School System and later started his career as the lead maintenance technician for Ralph A. Wells where he worked for over 55 years. He was an only child and fondly talked about his loving Great Grandmother, Cary Weaver, who raised him to become the great man that he was. Herman was married to the late Geraldine Washington and from that union, they were blessed with six children. Herman was greatly admired for his kind and gentle spirit and his warm personality. He enjoyed conversation and spending time with his family. He enjoyed making people happy with the things he could do for them. He worked on his own cars and trucks and he taught himself everything he knew about them. He was a master of fixing ninety-nine percent of anything. Herman’s favorite pastime was watching Nascar racing. His favorite driver was #18, Kyle Bush, and his second favorite was #11, Denny Hamlin. He also had a great love for his all-time favorite football team, The Washington Redskins. He had a fine collection of their caps and he never left home without one of them on his head. Herman was preceded in death by his first wife, Geraldine Washington; his second wife, Artie Jenkins; his grandson, Darren Jennings; his granddaughter, Shawn Mason; and his great-granddaughters, Aaliyah James and Jyrney Weldon-Crawford. He leaves his loving memories to be cherished by his children Alvin Lee (Debbie) of Staunton, VA, Nancy Jennings (Leroy) of Culpeper, VA, Herman Lee, Jr. of Warrenton, VA, Tracy Lee (Vincent) of Manassas, VA, Jason Lee of Manassas, VA, and Stephen Lee of Manassas, VA, Twelve grandchildren, Herman (Hoagie) Gaskins, Keshia McKinney, Crystal Bent, Chanel Ellerbe, Jason Mason, Alvin Mason, Cassandra Harris, Latasha Crawford, Tawanna Crawford, Dimondneek Crawford, Ashlee Jenkins, and Alvin Crawford, twenty-nine great-grandchildren, five great, great-grandchildren, and a host of relatives and friends The interment will be private at a later date.

The family of Herman C. Lee Sr. created this Life Tributes page to make it easy to share your memories.

Send flowers to the Lee family.