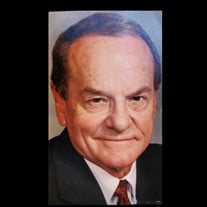 Herbert Joseph Legan passed away one day after his 98th Birthday at Fairfax Hospital on January 13, 2022. He was surrounded by his family. He succumbed to his head injuries after a fall. Herb was born in Maple Heights, OH. 1/12/24 the third in a family of 5 boys and 1 girl. He graduated Maple Heights High School excelling in the sports he loved, baseball and football. Accepted at John Carroll University (a Jesuit College) on a football scholarship as a pre-med student. World War II interrupted his studies when the V12 program came to John Carroll. He was sent to Notre Dame, after 90 days commissioned as an officer (ensign), sent to Little Creek, VA training on an LST-1107 as the navigator. Navigated the ship through the Panama Canal, Hawaii, Guam, Marshall Islands, and Enowetak joining the fleet in Okinawa. This was in 1945 where they survived kamikaze attacks and the typhoon which damaged the ship enough to send it back to Pearl Harbor for repairs. While in San Francisco he was notified by telegram he was promoted to Captain of the Ship, he was 21 years old! After the ship was decommissioned in 1946, he was honorably discharged and sent home by train to Maple Heights. He continued his studies at John Carroll and graduated in 1947, went to Case Western Reserve Law School where he was on the boxing team, graduating after 2 years around the clock studies from a 4-year program. He passed the bar the first time, while waiting to hear the results he played professional baseball in New Bern, NC (The Bears) then returned home to Maple Heights and opened his own law firm in 1949. He also worked for Travelers Insurance Company in Cleveland, OH, ran for and won as Councilman in Maple Heights. He found he was involved in too many areas and closed his law firm to concentrate on managing offices in Columbus and DC for Travelers Insurance. Travelers/Citigroup asked him to stay on another year to work with the McKinsey Group studying the entire claim/legal operation for a more effective operation, which he did. Finally in retirement he loved playing golf, cruising the seas with Dottie, was a devoted, loving husband, father and grandfather. His children and grandchildren brought him much joy! He and Dottie almost made it to their 70th Wedding Anniversary which would have been 5 months from now on June 28th, 2022. His survivors include his wife Dottie, his youngest brother Tom (wife Arlene), Sister-in-Law Dorothy Legan, Daughter Lynn (husband Mik), Daughter Karen (Randall), Son Mark (wife Vala), Son Brian. Grandsons Jesse, Michael and Christian. Granddaughters Olivia and Sanna. In lieu of flowers, if you wish, please donate in Herb’s name to St. Jude’s Children’s hospital Condolences can be sent to: Dorothy Legan, 13305 Fieldstone Way, Gainesville, VA 20155 or [email protected]

Herbert Joseph Legan passed away one day after his 98th Birthday at Fairfax Hospital on January 13, 2022. He was surrounded by his family. He succumbed to his head injuries after a fall. Herb was born in Maple Heights, OH. 1/12/24 the third... View Obituary & Service Information

The family of Herbert Joseph Legan created this Life Tributes page to make it easy to share your memories.

Herbert Joseph Legan passed away one day after his 98th Birthday...

Send flowers to the Legan family.