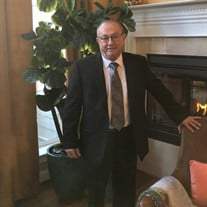 Harry Souheil Ghadban of Manassas, Virginia left this world a better place than he found it on December 9th, 2021 when he died unexpectedly of heart-related issues at Fairfax Hospital. He had spent the Thanksgiving holiday with family—laughing, reminiscing and making plans for the coming year. Harry was born August 7th, 1948 in Cairo, Egypt to Yolanda and Momtaz Ghadban. The family immigrated to the States when he was a young boy. Several years later they temporarily moved to Rhodes, Greece. Throughout his life, Harry looked fondly on his experiences in Greece and would often share stories about his time living there. When the family moved back to the U.S., he attended Osbourn High School. He later graduated from George Mason University in 1973, with a Bachelor of Science degree. Harry went on to establish multiple businesses and was in the building and land development industry for over fifty years. He founded NVP, Inc. in 1989 with his partner in life and business, Barbara. The company develops and builds residential communities throughout Northern Virginia. Harry was a maverick in his pursuits to entitle raw land, develop and create new home communities throughout Northern Virginia. He was instrumental in changing the landscape of Prince William County. Harry and Barbara’s annual Children’s National Medical Center golf outings raised more than $700,000 over the past 18 years to ensure children without medical insurance would be provided care. Harry was also an original supporter of George Mason University’s Hylton Performing Arts Center. His passion to give a helping hand to those in need was one of the many contributions he made to his community and friends throughout the years. Harry loved spending time with his family and friends, traveling, playing tennis, enjoying a good meal, laughing and making others laugh. He was known for his quick wit and sense of humor. He considered his work a hobby and would often repeat the old adage, “Do what you love, and you will never work a day in your life.” Harry is survived by his wife, Barbara; his three daughters, Cheryl Ghadban (Steve Maynard), Michelle Johnson (Ken Johnson) and Shannon Ghadban; his two step-sons, Damon Kelmartin and Nicholas Kelmartin (Patricia Kelmartin); his three grandchildren, Carmella Johnson, Victor Johnson and Mia Johnson; his three step-grandchildren, Canon Kelmartin, Zoey Kelmartin and Maxwell Kelmartin. He is also survived by his sister, Mary Ann Ghadban (Thomas Ackerly); his three nieces, Susie Webb, Kathy Ghadban Hamill and Ashley Elkin; and his beloved dogs, Lucy, Lily and Enzo. He is predeceased by his parents, Momtaz and Yolanda Ghadban; his brother, Jimmy Ghadban; his nephew, Shane Ghadban; and his cherished dogs, Hokie and Gizmo. Harry was a man of great integrity and was loved and respected by many. He will be deeply missed. The family will receive visitors from 6-8 p.m. on Tuesday, December 14th at Pierce Funeral Home in Manassas, VA. A funeral mass will be held at 10 a.m. on Wednesday, December 15th at All Saints Catholic Church, with burial to follow. In lieu of flowers, please consider making a donation in Harry’s memory to the ASPCA (American Society for the Prevention of Cruelty to Animals) or performing a random act of kindness for someone. Links: Pierce Funeral Home: https://www.piercefh.com ASPCA: https://secure.aspca.org/donate/memorial?ms=wb_lpf_waystogive-teaser&initialms=wb_lpf_waystogive-teaser&pcode=WEBMEMORY

Harry Souheil Ghadban of Manassas, Virginia left this world a better place than he found it on December 9th, 2021 when he died unexpectedly of heart-related issues at Fairfax Hospital. He had spent the Thanksgiving holiday with family&#8212;laughing,... View Obituary & Service Information

The family of Harry Ghadban created this Life Tributes page to make it easy to share your memories.

Harry Souheil Ghadban of Manassas, Virginia left this world a...

Send flowers to the Ghadban family.