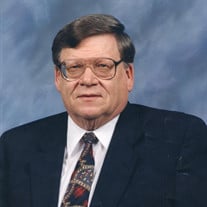 HAROLD L. HICKS September 7, 1934 – April 30, 2022 The Reverend Harold Lee Hicks, age 87, passed from this life to the Church Triumphant on April 30, 2022 following a season of declining health. Born in rural Culpeper, Virginia in 1934, Harold was a brother to Vernelle, Jim, Sonny, and Tommy. He began preaching on the South Culpeper Circuit in 1955. Harold was ordained as a United Methodist minister in 1961 and served 7 additional United Methodist Churches: Fairmont, Richmond; Louisburg Circuit; Macedonia, Raleigh; First Church, Lynchburg; Trinity, Poquoson; Belmont, Richmond; and Pender, Fairfax where he served from 1981 to 2001. He retired from the United Methodist Church in 2001 with 46 years of service. Preceded in death by his parents, Eugene and Myrtle Hicks, his wife of 60 years, Catherine, and two brothers, Sonny and Tommy, Harold is survived by his children, daughter Scarlett and her husband David, son Lee, and grandchildren Raleigh, Matthew and his fiancée Sydney, and Madison. In addition to his family, Harold’s passion was his church congregation. A 1966 newspaper article announcing his appointment to First Church, Lynchburg, was headlined “The Church is His Hobby,” and this was true throughout his long career. In addition to his daily work in the church office, most evenings involved prayer meetings, Bible studies, committee meetings, and social events centered around the church. In addition to growing the spiritual life of his congregants, Harold often led his team to build and expand the physical facilities of the churches he served. He wanted the church to be a place of hope for the surrounding community. Together with his congregation, Harold was instrumental in establishing Pender as the “The Church with a Heart for Missions.” One of his favorite partnerships was with the Rev. Frank Peoples in Philippi, West Virginia. Many members from Pender would travel to Philippi each summer to work on construction projects benefitting the local community. Harold and his wife, Catherine were amazing hosts who entertained hundreds of church members, friends, and neighbors at countless holiday celebrations and open houses throughout the years. Following his mother’s example, Harold was an accomplished cook, known for his chicken salad, corn chowder, squash casserole, and chocolate chip cookies. He rarely left his pulpit on a Sunday except for an annual vacation. In 1966, he and Catherine fell in love with the beauty of the Great Smoky Mountains. For the next 45 years, they and their children and grandchildren spent many idyllic summer weeks at Lake Junaluska in the western North Carolina Smokies. Words cannot describe how much he will be missed. The family will receive visitors at Pierce Funeral Home, 9609 Center Street, Manassas on Friday, May 6 at 10:00am, followed by a service celebrating Harold’s life at 11:00am, with Rev. Rudy Tucker officiating. Burial will take place at Fairview Cemetery in Culpeper, Virginia later in the afternoon. In lieu of flowers, gifts in Harold’s memory may be made to the Faith Promise Mission Program at Pender United Methodist Church in Fairfax.

The family of Rev. Harold Lee Hicks created this Life Tributes page to make it easy to share your memories.

Send flowers to the Hicks family.