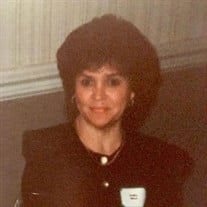 Gloria Maria Walls, aged 76, of Manassas passed away on May 19, 2021 at INOVA Fairfax Hospital in Falls Church, VA. Gloria will be missed by her children Tim Walls and Tammy Michelli; her siblings Martha Able, Norma Fielding, Alba Brooks, and Virgil Dolby; her granddaughters Kimberly Breisch, Brittany Breisch, and Allison Michelli; and one great-granddaughter Miriam Gosling. She was preceded in death by her husband, Louis Bernard Walls; her parents, Lawrence Dolby, Sr. and Maria Dolby; and brother, Lawrence Dolby, Jr. Gloria was born on August 5, 1944 in Panama on a U.S. military base. She moved to the United States in the late 1950s and settled with her family in Loudoun County where she attended Loudoun County High School. She met the love of her life Louis “Buddy” Walls in 1960 and married in April of 1961. After 23 years together, Buddy passed away in 1984. Gloria had a long career at the Northern Virginia Electric Cooperative (NOVEC). She was well-known for her dedication, work ethic, and kind customer service. Throughout her life, she was a woman that led by example for her daughter and granddaughters. She persevered through numerous personal and medical challenges with humor, glamour, and a glowing smile. Gloria was also known for her generosity and care for others. Her home was always a respite for friends and family in need of support. She loved Western movies and was also an avid golfer, which led to many fun trips with her best friend Joyce. Especially in her later years, her favorite vacation spot was the Outer Banks in North Carolina where she would spend time relaxing with family and her beloved dogs. A viewing and memorial service for Gloria is scheduled for Monday, May 24, 2pm at Pierce Funeral Home, 9609 Center Street, Manassas, Virginia. A graveside burial ceremony will take place on Tuesday, May 25, 10am at Stonewall Memorial Gardens, 12004 Lee Highway, Manassas, Virginia. In lieu of flowers, expressions of sympathy can be made by donating to the American Cancer Society. Condolences may be sent to: www.piercefh.com

The family of Gloria Maria Walls created this Life Tributes page to make it easy to share your memories.

Send flowers to the Walls family.