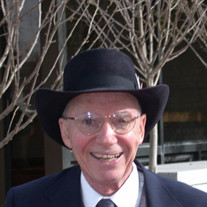 Glenn Kenneth Davis, 92, of Vienna, Virginia, died peacefully at home early Sunday morning, August 8, 2021. The son of Kenneth Samuel and Meta Montena Davis, Glenn is survived by his best friend and wife of 47 years, Carolyn, two daughters, Debbie Mason (Dave) and Ann Johnson (Alex), and two sons, Glenn K. Davis II (Melanie) and Lehi Davis. In addition he is survived by 15 grandchildren, 25 great grandchildren, and one great great grandchild. Born and raised in North Creek in the Adirondack Mountains of upstate New York when times were hard, yet simple, Glenn led a unique and interesting life. He traversed the mountains to hunt, fish, trap, and work in the woods with his father and brothers, Gene and Guy. He grew up learning to work and to serve others, but there was still time to excel at his favorite sport of skiing. He also excelled as a soda jerk behind the counter at the local drugstore, a talent he used later in life as he served chocolate ice cream sodas to many friends and soon-to-be friends over the years. With fellow classmates having been drafted to serve in World War II, Glenn graduated from high school in 1946 as the only male member of his senior class of three. Later that summer he enlisted in the Army at the age of 17 and served in Japan in the Army of Occupation. After his discharge from the Army, he worked various jobs until his formal training as a photographer landed him a job setting up the photo lab for a civil engineering firm where he later became a very successful line pilot. Although he loved flying he moved on to a position at Bausch & Lomb where he worked in research & development and later in sales and service. Eventually he and Carolyn set up their own family business in optical sales and service. As a member of The Church of Jesus Christ of Latter-day Saints, Glenn served in many different callings but most especially was an executive secretary to a number of Bishops, Stake Presidents, and Mission Presidents. He always said, "He who prepares the agenda, controls the meeting” – and he prepared the agenda! Mission service was also important as Glenn and Carolyn served two missions together and for several years opened their home to those serving missions in the area, providing a home away from home for missionaries while they, too, served others. Over the years serving was second nature to Glenn. He is described in endearing terms by everyone who knew him – words such as loving, considerate, generous, wise, and kind are used repeatedly – a gentleman's gentleman. He had a great sense of humor matched only by his greatness as a storyteller. He often said, "Never let the truth interfere with a good story." As is true with all good storytellers, quotes tend to make their way into legendary status, and Glenn was no exception. He was fond of saying "Life is short, eat dessert first" and "Keep on gittin’ it." But the quote best describing his outlook and his place in this world is "Life is good." Yes, life is good – because Glenn K. Davis was part of it for a lot of people. Family will greet friends Monday evening, August 16, 2021, from 6:00 to 8:00 p.m. at The Church of Jesus Christ of Latter-day Saints, 1325 Scotts Run Road, McLean, Virginia. Services will be held at the same location on Tuesday, August 17, 2021, at 10:30 a.m. followed by interment with Military Honors at 2:00 p.m. at Quantico National Cemetery, 18424 Joplin Road, Triangle, VA 22172. Masks will be required at these live events. The funeral services will also be broadcast online at https://zoom.us/j/87653686431?pwd=dGgvUG44b3lVYUtpZ0dUWjFmZm5zUT09 In lieu of flowers, we invite you to consider a donation to one of the following or a charity of your choice. Latter-day Saint Charities https://www.latterdaysaintcharities.org National Down Syndrome Society https://www.ndss.org National Ataxia Foundation https://www.ataxia.org

The family of Glenn Kenneth Davis created this Life Tributes page to make it easy to share your memories.

Send flowers to the Davis family.