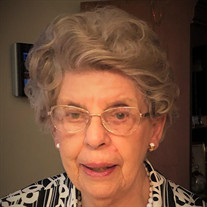 Gertrud “Trudy” Maria Van Balen (neé Kössinger), passed away peacefully on January 30, 2022, in Manassas, VA, of natural causes. She was 94. Born in Heilbronn am Neckar, Germany on July 30, 1927, the only child of Pauline Walz (1892-1964) and Georg Kössinger (1887-1974), Trudy survived a catastrophic bombing raid on Heilbronn on December 4, 1944, when over 6,500 people perished in 30 minutes. As a young woman, she worked as a photo technician and loved to ski in the Alps. She met her future husband, William “Bill” Van Balen, while he was stationed in Germany, and they were married on July 30, 1955 in Valley Forge, PA. They settled in Annandale, VA so they could be close to Bill’s work at the Department of Commerce. Trudy became a naturalized citizen of the United States in 1958. She worked as a fashion consultant for Jelleff’s of Washington, DC, serving many Capitol Hill socialites and wives of dignitaries before deciding to adopt a daughter and become a homemaker. Through the years, Germany was always an important part of her life, and infused the German culture into her family. She never lived far from a German bakery, and family meals often included dishes from her homeland. Her heart would light up whenever an overseas phone call came through, or when a postcard from a cousin arrived in the mail. A long-standing member of St. Albans Episcopal Church in Annandale, VA, she became involved with Extension Homemakers, and later was a volunteer Brownie scout leader and 4-H leader. Weekends were often spent at the family’s campsite in Oak Grove, VA. Summers always included time at the Outer Banks, taking long walks along the beach and collecting seashells. She loved to attend various music and theatre performances, enjoyed traveling, dancing, gardening, and was an avid reader, until she lost most of her vision in her later years. She was a devoted wife, mother, and grandmother. Despite numerous ailments, her fortitude carried her along. Trudy is preceded in death by her parents, Pauline and Georg Kössinger of Heilbronn, Germany, and many beloved cousins. She is survived by her husband of 66 years, William Van Balen, daughter Christina (Thomas) Harrigan, and grandchildren Megan and Sean Harrigan. Cousins Kurt Walz, Klaus Hellstern, Christine Walz, Hildegard Stang, Tilly Vogt, Hugo Walz, and numerous other family members in Europe remember her with love. Services followed by a reception will be held beginning at 11:00am on Saturday, February 19, 2022 at St. Albans Episcopal Church, 6800 Columbia Pike, Annandale, VA 22003. Private Interment will be at St. Albans Church Memorial Garden, at a future date. Flowers can be sent to St. Albans Episcopal Church, 6800 Columbia Pike, Annandale, VA 22003. Donations can be made in memory of Trudy Van Balen to St. Albans Episcopal Church Memorial Fund, or to the Prince William County 4-H Association, 8033 Ashton Ave, Suite 105, Manassas, VA 20109. Contact https://flowersnferns.com/ for help with flower arrangements. The website for the church is https://weaarestalbans.org/

The family of Gertrud "Trudy" Maria Van Balen created this Life Tributes page to make it easy to share your memories.