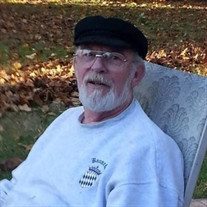 Gerald “Gerry” F. Eisert passed into eternity on Monday, November 8, 2021 after a brief, but difficult battle with Leukemia. He was born February 8, 2939 to Jerome and Winifred Eisert in Harborcreek, PA. Gerry was the second born in a family of eight children. He graduated in 1957 from Harbor Creek High School and went on to serve his country in the United States Air Force. In the USAF, Gerry had what his family would years later learn to be one of the most unique and interesting careers possible: a Photo Recon Technician, Still and Motion Picture Photographer. Just in recent years, he would captivate his family with his amazing stories, including an instance where President John F. Kennedy barked at him to “Get that camera out of my face!” In addition to the one-of-a-kind experiences he had in the Air Force, it’s also where he met the love of his life, Mildred Hott. They met at Eglin Air Force Base in December 1961, married just over a month after meeting, raised a beautiful family, and were together 40 years until death took Millie in September 2002. After living in Harborcreek, Pennsylvania and Valparaiso, Florida, the Eiserts settled in Chantilly, Virginia. Over the years following his military service, Gerry worked as a Fairfax County police officer, for Alban Caterpillar, and for Radiation Systems, a satellite builder in Sterling, Va. Gerry and Millie traveled and took many adventures together. Gerry didn’t stay in one place long, especially after losing Millie. He loved to take the scenic route and one never knew when he’d appear “up North” in Harborcreek, Pa., to attend a family reunion, visit family for the holidays, or “just because.” Besides his parents and wife, Gerry was preceded in death by three brothers, Jean F. Eisert, Michael F. Eisert, and Timothy F. Eisert, and a sister, Sandra L. Morgan. He is survived by a son, Gregory Eisert (wife, Angie), and a daughter, Lisa Booth (husband, Bryan); two granddaughters, Taylor Overton (husband, Taylan), and MacKenzie Booth; and a great-grandson, Jeremiah Overton. He also leaves behind three sisters, Mary Lou Hopkins, Cherryl Jones, and Patty Eisert, as well as a large extended family including many nieces, nephews, great-nieces, and great-nephews. Friends and family are invited to visitation at Pierce Funeral Home, 9609 Center St., Manassas, VA 20110 at 3 p.m. on Thursday, November 18 at 3 p.m. with a funeral service at 4 p.m. Burial will take place at 10 a.m. on Friday, November 19 at Quantico National Cemetery.

Gerald &#8220;Gerry&#8221; F. Eisert passed into eternity on Monday, November 8, 2021 after a brief, but difficult battle with Leukemia. He was born February 8, 2939 to Jerome and Winifred Eisert in Harborcreek, PA. Gerry was the second born... View Obituary & Service Information

The family of Gerald F. Eisert created this Life Tributes page to make it easy to share your memories.

Send flowers to the Eisert family.