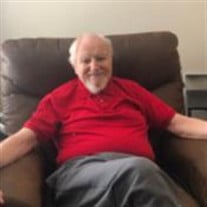 George Anthony “Tony” Miller LCDR US Navy (ret), age 85 passed away Saturday, January 9th, 2021 in his home in Gainesville, VA. Tony was born March 14, 1935 in Fairfield Kentucky. His birth family are the Halls’ of Bardstown KY. He was raised by Charles and Clara Miller in Cincinnati, OH. Tony attended Xavier Catholic High School and graduated from Xavier University in Cincinnati in 1957. Tony married Janet Marie Nunn in 1958 and they lived together with great love until her death in 2016. Their marriage was an inspiration to all who knew them. Immediately after graduation Tony Joined the US Navy in 1957 and was commissioned as an ensign. He served as a surface warfare officer on destroyers and a number of other naval platforms. Tony was stationed in Rhode Island, Norfolk and the Bahama Islands. He retired honorably after a 20-year career as a Lieutenant Commander. Tony transitioned to a civilian career in Virginia Beach where he was a Real Estate broker and business owner. His love of the sea and travel called him to a career change, and he went to sea as a cable laying specialist for AT&T’s undersea division in Greensboro NC. He Moved to Atlanta GA and retired from AT&T after 20 years. Tony and his wife of 58 years, Mary, were highly involved members of St. Benedicts Catholic Church in Duluth, GA as well as their church communities St Paul the Apostle in Greensboro NC and St Nicholas Catholic Church in Virginia Beach, VA. Tony’s life was marked by his love of his family and service to others. In addition to his service and devotion to the Catholic Church he was a volunteer with numerous groups throughout his life to include youth and sports groups, Habitat for Humanity and a substitute teacher. Survivors include his three sons: Stephen Anthony Miller and wife Beth, Charles Bruce Miller and wife Jana, and Craig John Miller and wife Christine; three daughters: Janine Donovan, Ann Elizabeth Small and husband Ronald, and Mary Ellen Wade and husband Marty; one brother: Carol Hall. Nephews Pat and Lee Hall and Nieces Beth Mattingly and Charlotte Pendergrass. Tony has 12 grandchildren and 7 great grandchildren. Mass of Christian Burial will be held on Friday January 15th at 1:30 PM at Holy Trinity Catholic Church in Gainesville, VA Interment will be at Quantico National Cemetery, Triangle, VA at a later date. Arrangement are being handled by Pierce Funeral Home in Manassas, VA

The family of George Anthony Miller created this Life Tributes page to make it easy to share your memories.

Send flowers to the Miller family.