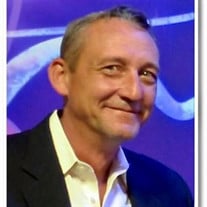 George Brantley Martin Jr, a true friend and mentor, 56, died unexpectedly March 27, 2021 in Fairfax, VA, as a result of a massive heart attack. He was born and raised in Athens, Georgia, graduated from Clarke Central High School in 1982, attended University of Georgia, worked for Erle Lively Plumbing, and Georgia Power Company. In South Carolina he owned and operated Martin Pressure Washing in Spartanburg until he enlisted in the Army in 1990. SGT. George B. Martin, was stationed in Okinawa, Japan; Seoul, South Korea; and Sierra Vista, Arizona where his specialty was Satellite Communications. After his military service, he worked in Business Development with General Dynamics in Sierra Vista, Arizona and Fairfax, VA; NetCentrics Corporation in Herndon, VA; and Martin Information Technology in Haymarket, VA. These years involved his working in Afghanistan, Kuwait, Iraq, Turkey, England, Germany, France, Belgium, and the US. He was awarded the Certificate of Commendation by the Coalition Provisional Authority for his efforts on the behalf of the Iraqi people. George’s pride and joy were his sons, coaching their soccer and baseball teams and encouraging their Taekwondo practice. He was known as a man of principle, a true patriot, a loving husband, a fabulous storyteller with an outstanding sense of humor. Most of all, he was known for his relentless generosity, which abides with the donation of his organs. He is survived by his wife Kyung-Hwa, sons Willis and Julian, of Haymarket, VA; his mother Agnes Martin, Spartanburg, SC; sisters Lillian Martin Stephano (Dan), New Hope, PA; Reed Martin Chewning (Michael), Spartanburg, SC, niece Mary Fields Chewning and nephew Ligon Chewning, Spartanburg, SC. He is predeceased by his father, Dr. George B. Martin, Sr. His ashes will be placed in Arlington National Cemetery. A celebration of his life will be held on Wednesday, April 7, 2021 at the Piedmont Country Club, 14675 Piedmont Vista Drive, Haymarket, VA 20169 at 2pm. Indoor and outdoor spaces available, covid max capacity is 150 people. In Lieu of Flowers please contribute to the G.B. Martin Family Trust, 3205 Creamery Road, New Hope, PA 18938, for his children. Please scroll down to view George's 50th birthday video.

George Brantley Martin Jr, a true friend and mentor, 56, died unexpectedly March 27, 2021 in Fairfax, VA, as a result of a massive heart attack. He was born and raised in Athens, Georgia, graduated from Clarke Central High School in 1982,... View Obituary & Service Information

The family of George Brantley Martin Jr. created this Life Tributes page to make it easy to share your memories.