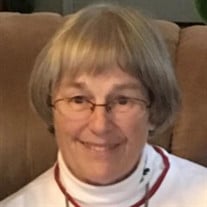 George Ann (GeoAnn) Mawhiney 77, passed away peacefully surrounded by loved ones on Wednesday, March 31, 2021 in Manassas VA. GeoAnn was born September 2, 1943 in Pawnee City, Nebraska to George and Mildred Mawhiney. GeoAnn attended Pawnee City High School class of 1961, where she would eventually meet and marry her high school sweetheart Larry Graham. Larry enlisted in the Navy and GeoAnn, at the age of 18, traveled by bus from Lincoln Nebraska to New York City to take an ocean liner to Germany to be with Larry during his Navy deployment. After their life in the Navy was over, they came home and started a family. First came a baby boy (Troy) in June 1967, then a daughter (Sherri) in March 1969. During this time, GeoAnn and her family lived overseas in Columbia, Liberia, and the Philippines. In 1974, the family returned to the States and baby number three (Christopher) was born June 1974. The family moved to Manassas, VA where GeoAnn would live most of her adult life, with a few layovers in Germantown, MD, Allentown, PA, and Bethlehem, PA. After divorcing in 1975, GeoAnn was determined to do whatever it took. She raised her three children and made incredible sacrifices for them. She started doing day care and at one point was watching as many as 20 kids to make ends meet. When she was told she could not watch that many kids, she found work as an executive secretary at Honeywell and later at Planning Research Corporation (prc). Day care costs were taking a lot of her pay so she convinced her mom, Mildred, to move in and watch her grandchildren while GeoAnn was working. GeoAnn wanted her children to grow up loving God, family, and country. She was instrumental in helping her children find their own way in life, be self-sufficient, and to serve mankind through their churches, communities, family and friends. Soon after the divorce, she joined St. Thomas United Methodist Church of Manassas before finding her calling at All Saints Catholic Church. She volunteered as a Eucharistic Minister, 2nd Grade CCD Teacher, Lector, Prison Ministry and Mass Coordinator. GeoAnn sacrificed so her children could attend private school to include All Saints School and Paul VI. She continued to sacrifice for her children throughout their lives. In 1994, upon receiving a higher calling from God, GeoAnn relocated to Allentown, PA where she took an administrative position for Our Lady Missionaries of the Eucharist, working within the lay community. She then moved on to Bethlehem, PA where she taught CCD (Confraternity of Christian Doctrine) to 2nd graders at Notre Dame of Bethlehem where she prepared children for their First Holy Communion. During this time, GeoAnn received her Associates Degree in Theology at DeSales University. GeoAnn moved back to Virginia where she continued her devotion to God working for All Saints Church as a Church/Mass Coordinator. GeoAnn enjoyed reading, walking, hiking, camping, volunteering for the church and spending time with family. GeoAnn is preceded in death by her beloved parents George and Mildred Mawhiney, her brother Robert Mawhiney, and her Ex-husband, Larry Graham. GeoAnn is survived by her brother Bill Mawhiney, her sister in law Belinda Mawhiney, her three children and their spouses, Troy Graham (Rita), Sherri Andre (Bill), Christopher Graham (Esther) by her 11 grandchildren, Hunter, Emily Kaela, Will, Josh, Jaime, Shiloh, Meghan, Bailee, Jonas-George, Xavier and great grandchildren Hope and Peyton and by her nieces Ginger, Stacy, Amanda, Elizabeth nephews Tim, Mathew, Mitchel, Joshua, Thomas, James, Benjamin. In lieu of flowers, the family asks that donations be sent to Catholic Charities MOTHER OF MERCY in loving memory of GeorgeAnn Mawhiney. https://secure.ccda.net/Give/Give/Donate/Giving.aspx

The family of George Ann Mawhiney created this Life Tributes page to make it easy to share your memories.

Send flowers to the Mawhiney family.