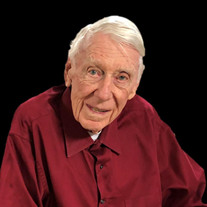 Forrest Carlton Cranor, loving father, husband, grandfather, and great-grandfather passed away peacefully at age 94 on December 2, 2020 in Warrenton, Virginia of natural causes. Carlton is survived by his children, John Cranor married to Lynda Cranor, and Susan Arbogast, née Cranor, married to Eugene Arbogast; his grandchildren, Elizabeth Fiebig, née Arbogast, and Melissa Bolt, née Arbogast, and their respective husbands Brian and Christopher; and his great grandchildren, Raelynn, Hadleigh, Sadie, Charlotte and Jackson. He is predeceased by his parents, Forrest Earl Cranor and Anne Cranor, née Wooldridge; his sister, Patricia Whitlock Rosaire; and his loving wives, Nancy Cranor, née Evans, of 39 years and Cathy Cranor of 21 years. Carlton was born on September 3, 1926 in New Orleans, Louisiana, and shortly afterwards his family moved to Texas. He attended Sewanee Military Academy in Sewanee, Tennessee, and went on to earn his Bachelor of Science degree in Physics from the University of Texas. Carlton’s honorable active and reserve military service encompassed both World War II and the Korean conflict with the US Army Air Corps and, later, with the newly established US Air Force. Subsequently he made Dallas, Texas his home where he raised his two children with wife Nancy. He worked several years for Collins Radio Corporation before founding Southwest Electro Products. It was here that Carlton made long-lasting contributions to the custom jewelry industry, making the industry what it is today. For instance, his design and manufacture of unique equipment such as the Programmed Therminder—most of which are still in use to this day—allowed the user to focus on the work of custom jewelry making instead of programming complex equipment. Upon retirement, they made Ponte Vedra Beach, FL their new residence having spent many years vacationing there with family and friends. Following Nancy’s death in 1994, he remained in Ponte Vedra Beach, FL where he met and married his second wife, Cathy, in 1996. Carlton was a man of many interests and talents who applied them to a myriad of projects and hobbies, from electro-mechanical and electronic circuit design to barometer and barograph restorations, to maritime chronometer restorations and clockmaking. A most fitting recognition of his diverse talents was his earning of the title Certified Master Clockmaker (CMC) from the American Watchmakers-Clockmakers Institute (AWCI). But most importantly Carlton was a kind and loving man whose good humor and cheer, always accentuated with a ready smile, will be greatly missed. The family wishes to thank the management and staff of Fauquier Health Rehabilitation & Nursing Center, Warrenton, Virginia, for their constant care and attention to Carlton’s health and physical well-being. His children and grandchildren will be hosting a Celebration of Life at Piedmont Golf Club in Haymarket, Virginia on Saturday, December 5, from 4:00pm to 7:00pm. Guests will be received on a rotating basis as necessary in adherence to COVID-19 guidelines. A funeral service will be held at a later date at Palms Presbyterian Church in Jacksonville Beach, Florida.

The family of Forrest Carlton Cranor created this Life Tributes page to make it easy to share your memories.

Send flowers to the Cranor family.