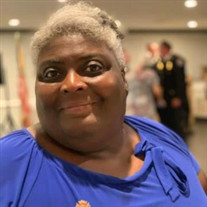 Fay Denise Crawley, age 56, went peacefully home to our Lord and Savior on February 28, 2021. Fay was born on December 22, 1964 in Richmond VA, to Ella Stewart Crawley and Samuel Wyatt. At a young age, Fay accepted Jesus Christ as her Lord and Savior and was baptized at Center Star Baptist Church where she was a member, until she moved to Northern Virginia and became a member of Oak Grove Baptist Church under the direction of Rev. Dr. Hennie Brown, Jr. and devout family deacon, Artie Brown. Fay grew up in Dinwiddie, VA and was always surrounded by family. She later moved to Waverly, where she then graduated from Sussex Central High School with the class of 1983. While in high school, she was a member of the marching band. She always recalled of a happy time in high school and had fond memories with friends, some who then became lifelong friends. Fay was very excited to be able to participate in her 35-year class reunion in 2018. Fay’s dream job was to be a Travel Agent, and she excelled tremendously in this area. Her love for helping people and experiencing travel on her own made her the perfect agent. Most recent, Fay was also employed at the new location of Rosie’s in Dumfries, VA. This was a new field for her, but she took the job with stride and even in her short time at Rosie’s, those at Rosie’s came to easily love her. She was also concurrently employed at Centerview Title Group in Chantilly as a pre-settlement processor since Spring 2020, working remotely. In the past, Fay also was employed by United Airlines (IADRR), Red Lobster, in Manassas, as well as Northside Auto Sales. The relationships built at these companies created lifelong friendships for Fay. Although Fay enjoyed her jobs, her most prized job was as a mother to Adrienne, Morgan, and Treasure. Her daughters were always put first and they knew it. She devoted so much time to loving them and then further loving her grandchildren. Fay was an avid Traveler and enjoyed each of the many trips she took solo, as well as with various friends to include Virginia Marshall, Cynthia Johnson, and Sandra Johnson. Her most recent vacations would be a cruise around Europe in 2019, a combination of vacations to Cancun, Jamaica, and Aruba. In her free time, she dedicated herself to a work of volunteering. Volunteering in the early days at Jennie Dean Elementary School, you could find Fay helping students to read. In addition, she volunteered as a Girl Scout Leader. Leading many young girls to become independent women, she went on camping trips, worked summer camps, and powered thru cookie season, for many years, even beyond the time when her daughters were scouts. She also was an active auxiliary member of the Manassas Volunteer Fire Company, were she worked as a Bingo Manager, as well as freely helping in the kitchen as well as on the floor for bingo. Fay was always willing to help out as necessary at the Fire Station, prior to the COVID-19 pandemic. Her last act of service can be remembered as helping in winter 2020, delivering food to the less fortunate during the holiday season. Fay was always willing to help anyone out who was in need, as best she could. Fay is predeceased by her mother, Ella Stewart Crawley, who she has spent the last 27 years dearly missing; and her father, Samuel Wyatt. Fay leaves to carry on her legacy of life and love to her three daughters, Adrienne and Morgan Taylor, of Fredericksburg, VA and Treasure Taylor (Christopher) of Bealeton, VA; one step-daughter, Dedrea Epps of the Bronx, NY; two prized grandchildren Elijah and Ella Taylor; one grandson, Theodore Green; Devoted Aunt, Joyce Fitzgerald-Harris (Allie) of Herndon, VA; Aunts: Shirley Lassiter of Dinwiddie, VA; Lillian Moore of Abesecon, NJ; Floris Lipperman (Michael) of Greensboro, NC; Bertha Frazier of Newark, NJ; Geneva Stewart of Woodbridge, NJ. Five uncles John Crawley (Dorothy) of Dewitt, VA; Lou Crawley (Darlene) of St. Louis, MO; Joseph Wyatt of Dewitt, VA; Leon Wyatt of Dewitt, VA; Thomas Wyatt of Plainfield, NJ. One sister Mozelle Harris (Calvin) of Petersburg, VA; One brother Wayne Booth of Kenbridge, VA; Further survived by a niece and nephew Pecola and Michael and a host of cousins, relatives, and treasured friends. A Memorial Service will be held on Sunday March 7th at 2PM at Pierce Funeral Home, 9609 Center Street, Manassas, VA with Rev. Jesse Smith officiating. Due to COVID-19 restrictions, the memorial service will be a private service for family. The memorial service will be live streamed and broadcasted after for those not in attendance. https://www.tributeslides.com/tributes/show/Q2FT2WNR826L7DTM

The family of Fay Denise Crawley created this Life Tributes page to make it easy to share your memories.

Send flowers to the Crawley family.