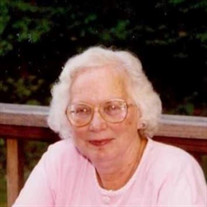 Fanchon Lewis Fischer, age 89, of Manassas, VA passed away peacefully on June 5th, 2022. She was born in October of 1932 to the late Helen Marie Moss Lewis and Charles Cicero Lewis in Ft. Smith, AR. She spent her early childhood years in Van Buren, AR and moved to Ft. Smith, AR when she was in the fifth grade. She graduated from Ft. Smith High School in 1950, then continued her education by earning an Associate’s Degree from Arkansas State College in Jonesboro, AR. She majored in Graphic Arts Printing and minored in Journalism. In the summer of 1952, she and her girlfriend took a “summer job” with the FBI in Washington, DC. This summer job led to a new life in Virginia where she met and married Robert Fischer in 1954 where he was a US Marine stationed in Washington, DC. Sadly they divorced in 1977. They moved to Manassas, VA in the late 1950s and became the parents of sons Steven and Jeffrey. Fanchon was a longtime member of Emmanuel Baptist Church and served as church librarian for many years. She worked for the Prince William County School Board for many years in the Staff Library. Her hobbies included watching local stock car racing at Old Dominion Speedway and attending Nascar races with friends. She loved her family and made many sacrifices through the years for them. She loved all animals, but especially her dogs. Fanchon is survived by sons Steven (Karen) and Jeffrey, her sister Carol Lewis Taylor of Lago Vista, TX, and several nieces and nephews. She is pre-deceased by her parents, Helen and Cicero Lewis and her brother, James Charles Lewis. In lieu of flowers, the family gratefully requests that a donation be made in Fanchon’s name to the charity of your choice. The viewing will be held on Monday, June 13, 2022 from 6:00 to 8:00PM at: Pierce Funeral Home 9609 Center St. Manassas, VA 20110 A memorial service will be conducted on Tuesday, June 14, 2022 at 11:00AM at the Chapel at the Pierce Funeral Home. There will be no graveside service.

Fanchon Lewis Fischer, age 89, of Manassas, VA passed away peacefully on June 5th, 2022. She was born in October of 1932 to the late Helen Marie Moss Lewis and Charles Cicero Lewis in Ft. Smith, AR. She spent her early childhood years in Van... View Obituary & Service Information

The family of Fanchon L. Fischer created this Life Tributes page to make it easy to share your memories.

Send flowers to the Fischer family.