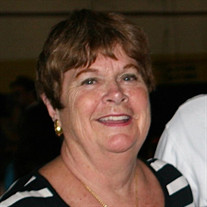 Elizabeth Ann (Boerker) Guerreri of Manassas, Virginia passed away peacefully on December 24, 2020 at the age of 77 after an eight year struggle with Alzheimer’s disease. She was the daughter of the late Claudine (Brailey) and Allan Boerker. She was the beloved wife (56 years) of Carl N. Guerreri. She is survived by her husband Carl and her four children Cynthia (Brian) McNally, Lisa (Joseph) Huffman, Linda (Jason) Pizzillo and Christopher (Margaret) Guerreri. She was the proud Nana of twelve grandchildren Deborah, Meghan, Jack, Joshua, Colin, Charlotte, Benjamin, Emma, Violet, Bode, Emmit and Annabelle. She was a devoted mother and grandmother and was always there for them--whether it was baiting a fishhook, driving to gymnastics meet, babysitting, taking them to Disney World, a concert or a Washington Capitals game. She loved to travel both domestically and internationally and visited over 20 countries. Her two favorite destinations were Las Vegas and anywhere in Australia. She was born on June 25, 1943 in Bangor, Maine. She grew up in Cheshire, Connecticut and graduated from Cheshire High School in June 1961. She attended Vermont College and graduated with an associate degree in Medical Technology in 1964. She married Carl in June 1964 after which they lived in Ft. Bragg, NC, Framingham, MA, Fairfax, VA and for the last 53 years in Manassas, VA. Because of COVID-19 there will be a private funeral service and interment. The family requests that in lieu of flowers a contribution be made to the Alzheimer’s Association in her name.

Elizabeth Ann (Boerker) Guerreri of Manassas, Virginia passed away peacefully on December 24, 2020 at the age of 77 after an eight year struggle with Alzheimer&#8217;s disease. She was the daughter of the late Claudine (Brailey) and Allan... View Obituary & Service Information

The family of Elizabeth Ann Guerreri created this Life Tributes page to make it easy to share your memories.

Send flowers to the Guerreri family.