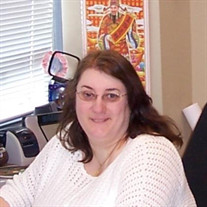 On Saturday August 21, 2021, Elisabeth Marcelle Claire Madison, loving mother of 3, and grandmother passed away from ALS at the age of 61. Elisabeth was born on April 30, 1960 in Neuilly Sur Seine, France to Pierre and Sabine Tranchant. She met her future husband on a blind date in the United Kingdom, setup by two mutual lifelong friends. Elisabeth and Matt married in 1983 in the tiny village of Droue Sur Drouette France, they then moved to Soesterberg AB in the Netherlands where their first child was born. After three wonderful years in the Netherlands they moved to Madrid Spain. During this time, nothing made her happier than traveling Europe with her husband and child, spending time with her French family, eating, drinking, and filling the house with conversation and laughter. After four years in Spain, the Air Force transferred Elisabeth and Matt to South Carolina, where they had two more children, Steven and Emanuelle. She quickly adapted to living in the American South, making many friends and working as a Real Estate agent, all the while raising her three children and traveling. All who were lucky enough to know her will miss her smile and quirky sense of humor. Her two sons Mikael and Steven and her daughter Emanuelle survive her, as well as her beloved granddaughter Erin. Elisabeth also leaves behind her stepmother Claire, brother Michel, niece and nephews Alexandra and Thibault, brother and sister in law Donna and Nicholas Madison, and many Aunts, Uncles and cousins in France. Elisabeth will inurned at Arlington National Cemetery, at a future date. In lieu of flowers, please consider donating to the ALS Association. https://www.als.org/donate

On Saturday August 21, 2021, Elisabeth Marcelle Claire Madison, loving mother of 3, and grandmother passed away from ALS at the age of 61. Elisabeth was born on April 30, 1960 in Neuilly Sur Seine, France to Pierre and Sabine Tranchant. She... View Obituary & Service Information

The family of Elisabeth Marcelle Claire Madison created this Life Tributes page to make it easy to share your memories.

Send flowers to the Madison family.