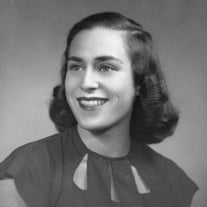 Eileen S. Jackson passed away peacefully on Tuesday, July 6, 2021 in her residence in Manassas, Virginia. She was 96. Eileen was born on March 28, 1925 in St. Louis, Missouri. She attended Beaumont High School, graduating in 1943. During high school, Eileen earned All-American honors as drum major with the St. Louis Post Office Drum and Bugle Corps. From 1949-1950, Eileen served in the Third Infantry Battalion, U. S. Marine Corps Reserve, attaining the rank of Private First Class. All who knew her throughout her long life will affirm there never was a more "Gung Ho" Marine. In 1950, Eileen married Mallett C. Jackson Jr. and served as a Marine wife for the next 22 years until Mal's retirement. During this time, Mal, Eileen and their family moved countless times, from California to Florida, and numerous points in-between, with Eileen frequently holding down the "home front" when Mal deployed with the Marines. In 1972, Eileen and Mal relocated their family to Pinellas County, Florida where they were residents for nearly 45 years. During the 1970s, Eileen was an active volunteer at St. Petersburg Catholic High School where she could be frequently found on campus supporting a wide variety of activities. One of her proudest accomplishments was the founding of the "Band of Barons" in 1977. In retirement, Eileen and Mal were socially-active in their St. Petersburg, Largo and Seminole, Florida communities and are fondly remembered by their many friends. Eileen loved to organize and host themed parties, her favorite being those with a patriotic theme. In the late 1990s, Eileen and Mal organized and led the Imperial Point Ladies Drill Team, also known as "Mal's Gals," that proudly participated in numerous Pinellas County community parades. Eileen also loved to sew, and many of her creations have become family heirlooms. In 2016, Eileen and Mal relocated to Northern Virginia, where they became members of All Saints Catholic Church. Mal predeceased Eileen on February 5, 2020, after nearly 70 years of marriage. Eileen is survived by sons Dennis M. Jackson, Kevin C. Jackson and Timothy J. Jackson; daughter Nancy Jackson Patrick; son-in-law Jeffrey A. Patrick; daughter-in-law Sherri Condore Jackson; 12 grandchildren and 13 great grandchildren. Eileen is lovingly remembered as a generous and loving wife, mother, grandmother and great grandmother and greatly missed by all. The family will receive friends on July 19, 2021 at Pierce Funeral Home, 9609 Center Street, Manassas, VA from 7:00 PM to 9:00 PM with a rosary service at 6:30 PM. A Mass of Christian Burial will be held at 10:30 AM on July 20, 2021 at All Saints Catholic Church, 9300 Stonewall Road, Manassas, VA. Interment will follow at Quantico National Cemetery at 12:30 PM.

Eileen S. Jackson passed away peacefully on Tuesday, July 6, 2021 in her residence in Manassas, Virginia. She was 96. Eileen was born on March 28, 1925 in St. Louis, Missouri. She attended Beaumont High School, graduating in 1943. During high... View Obituary & Service Information

The family of Eileen S. Jackson created this Life Tributes page to make it easy to share your memories.

Send flowers to the Jackson family.