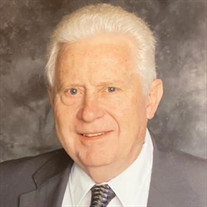 Edward Clarence Dufrane, age 87, of Gainesville, VA, passed away on Sunday, November 7, 2021, at his home. He was born on December 3, 1933, in Kimberly, Wisconsin to his parents Lawrence Dufrane and Johanna (Vanden Wyngaard) Dufrane. Edward graduated from Kimberly High School in 1953, where he played football, ran track, sang in the chorus, and worked on the yearbook. Upon graduation Edward entered the U.S. Navy to serve 4 years duty to his country as a Radarman on the USS Taconic AGC-17 and the USS Adirondack AGC-15. He met Catherine Pawlak in 1955 and the two were married on October 19, 1957, in Grindstone, PA. Edward continued a career in telecommunications for Western Electric and AT&T, as a telephone technician. He retired from AT&T after 35 years in 1994. Edward loved God and his family. He enjoyed singing, bowling, baseball, football, playing cards and games, and had a great sense of humor. He was a servant of God singing in the church choir for many years, along with being a member of the Knights of Columbus. He was a family man coming from a large family of which he had 10 siblings. He was a wonderful husband who loved and cared for his wife for 62 years, and a great father to 3 children, and a lovely grandfather to 7 grandchildren. Edward was endeared and loved by many of his family and friends who also affectionately called him “Sonny” or “Dewey”. Edward is survived by his children: Stanley Dufrane (Suzanne), Vincent Dufrane (Amy), and Joanne Dufrane Bennett (Mike); his sisters: Agnes Smarzinski and Delores Boudry; as well as seven grandchildren: Madeline Dufrane, Matthew Dufrane, Elizabeth Dufrane, Emily Dufrane, Vincent Dufrane, Catherine Bennett, and Michael Bennett. Edward was preceded in death by his wife Catherine (Pawlak) Dufrane; siblings: Levi Dufrane, Frances Zwiers, Lawrence “Tooty” Dufrane, Myrtle Sauer, Harold Dufrane, Ruben Dufrane, Rosella Schumacher, and Carol Hietpas. The family has entrusted Pierce Funeral Home with the arrangements. Family and friends will gather for a visitation on Sunday, November 14, 2021, from 6:00-8:00 PM at Pierce Funeral Home, 9609 Center St. Manassas, VA 20110. A Mass of Christian Burial is scheduled for Monday, November 15, 2021, at 10:30 AM at Holy Trinity Catholic Church, 8213 Linton Hall Rd. Gainesville, VA 20155. Internment will then be held at Stonewall Memory Gardens on Monday, November 15, 2021, at 12 PM, 12004 Lee Hwy. Manassas, VA 20109. Father Vander Woude will officiate the ceremony. A reception will follow at the Bennett house. To send flowers or a memorial gift to the family of Edward Dufrane please visit our Sympathy Store, or charitable donations can be made in his name to St. Jude Children’s Hospital, Boys Town, Veterans of Foreign Wars (VFW) or Paralyzed Veterans of America.

Edward Clarence Dufrane, age 87, of Gainesville, VA, passed away on Sunday, November 7, 2021, at his home. He was born on December 3, 1933, in Kimberly, Wisconsin to his parents Lawrence Dufrane and Johanna (Vanden Wyngaard) Dufrane. Edward... View Obituary & Service Information

The family of Edward Clarence Dufrane created this Life Tributes page to make it easy to share your memories.

Send flowers to the Dufrane family.