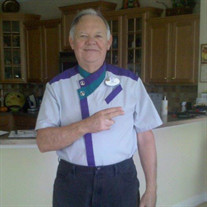 Edward James Chanen, born on 12/12/1936, passed away 3/1/2021. He leaves behind his late wife Harriet M. Calder, who departed two years ago. The two were married for 50 years. Ed also leaves behind three daughters, Laurie A. Hamilton, Judy L. McDonough, and Susan J. Hernandez, as well as five Grandchildren and a Great Grandchild. Ed began his career in the GE Apprentice course in Pittsfield MA, which eventually led to a life-long career in computers, mostly with Honeywell. He once stated that he would have worked for free, since his interest in the field was just that strong. An early retirement allowed for him and his wife to experience life in Las Vegas, later in Florida, and then in Virginia. In Orlando, Ed chose to pursue another fun interest, and that was at Walt Disney World. This became a 10-year part-time career as a Cast Member, working at Epcot Center on the "Journey into Imagination" attraction, and then later at the Magic Kingdom in Tomorrowland. He especially loved opening the park at the rope drop, where in previous years, his family were "mere visitors" to the park, without the coveted Disney badge that he posessed. During the child-rearing years, Dad helped us make a "spooky" home movie with actual film, where a model car driving on a coffee table was done by a "ghost," and not an early stop-annimation technique. In the summer, we would often go to one of the beachside or local amusement parks, and Dad could be counted on to take us on the stomach-flipping rides, with Mom waiting down below. Dad drove two different daughters, one south, and one west, to start new jobs and set up apartments, partly because he was Dad, but truth be told, he just loved road trips! Over the years, Harriet and Ed, before and after children, managed to travel the country by car and by plane, and especially loved Las Vegas, Disney World, Sonnys, watching CNN, Crime Shows, "Everyone Loves Raymond,"and visiting obscure places such as the World's Tallest Thermometer in CA, followed up with a burger at Bun Boy's. Ed's hobbies included chess, HAM radio, astronomy, HO Trains, blackjack, electronics, dining out, traveling, road trips, amusement parks, polkas, get-togethers, and he very much enjoyed the company of his wife Harriet. He was loved by all and will be deeply missed. A small graveside service will be held on Friday with the sisters in attendance.

The family of Edward James Chanen created this Life Tributes page to make it easy to share your memories.

Send flowers to the Chanen family.