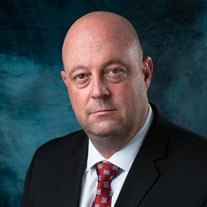 Edmund John “EJ” Kelly, 49, a Lieutenant with the Virginia State Police and a 23-year veteran of the force, died unexpectedly on 17 December 2018 at his home in Haymarket, VA. Born 10 September 1969 in Falls Church, VA to Edmund William Kelly (deceased) and Virginia Kelly, 75, he spent much of his childhood overseas growing up the son of a highly-regarded foreign service officer. After moving back to the United States, EJ attended middle school in Virginia and High School in Malvern, PA. As a sought-after three-sport varsity letterman, EJ was recruited by several universities for both baseball and football before agreeing to accept a full scholarship to play strong safety for Kent State University. His passion for athletics and supreme knowledge of the game earned him many accolades from the team and eventually earned him an assistant coaching position while finishing his degree and graduating in 1993. Having earned a Bachelor of Arts degree in Criminology and Justice Studies, EJ worked briefly for the International Association of Chiefs of Police (IACP), the Arlington Police Department, and the Federal Bureau of Prisons before deciding to apply to the Virginia State Police Academy. In 1996, EJ was the Honor Graduate, graduating 1st in his class at the Academy, and was placed into service in Northern Virginia. Throughout his 23 years of service, EJ served the commonwealth and the nation as a trooper, investigator, member of the bomb squad, and special agent assigned to DEA, Washington Divisional Office, High Intensity Drug Trafficking Areas (HIDTA) Task Force. As a member of joint task forces, EJ participated in and eventually lead teams of law enforcement officials from the Commonwealth of Virginia, and various federal agencies. His dedication to the mission and limitless commitment to his team was a driving factor of their collective success. For all his efforts, EJ was awarded 24 medals, commendations, and awards from the FBI, VA State Police, DEA, State of Maryland, District of Columbia, ATF, and others. Most recently, EJ was awarded the 2017 United States Attorney General's Award for Distinguished Service and named first runner up for the National Trooper of the Year in 2018. His passion for his work was only surpassed by his love a devotion to his wife, Katie, and two children, Patrick, 12 and McKenna, 10. EJ loved spending time with his family as he cherished his role as husband and father more than anything else. Friends and neighbors saw EJ and Katie, both athletes and dedicated law enforcement officers, as the perfect pair. On most days, the whole family could be found coaching and cheering one of the kids as they played in various local sports leagues, or on the golf course enjoying a family round before dinner. Sadly, EJ’s presence on the sidelines, in the dugout and on the golf course will be deeply missed. EJ was predeceased by his father Edmund William Kelly, and is survived by his mother, Virginia Kelly, wife Katie, son Patrick, daughter McKenna and his brother, Kevin. A service commemorating his life and his dedication to the Virginia State Police will be held on 3 January 2019 at the Park Valley Church in Haymarket, VA at 10 a.m. EJ will be interred at a private family event to be held at a later date. In lieu of flowers, the Kelly’s ask that you consider donating to EJ’s favorite charity, the Virginia State Police Association Emergency Relief Fund. Contributions to this fund help the Association provide emergency relief to members of the Department of State Police and other law enforcement officers and their families who experience a personal crisis and have nowhere else to turn. Donations are tax deductible and can sent to VA State Police Association ERF, 6944 Forest Hill Ave., Richmond, VA 23225 or https://www.vspa.org/donate/erf.html

The family of Edmund John "EJ" Kelly created this Life Tributes page to make it easy to share your memories.

Edmund John “EJ” Kelly, 49, a Lieutenant with the Virginia State...

Send flowers to the Kelly family.