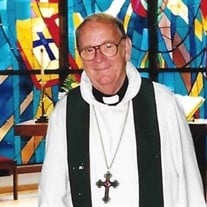 Rev. E. Harold Jansen, Bishop Emeritus, died on January 2nd after a long battle with Alzheimer’s. Harold was born on August 31, 1930 in Brooklyn and son of Herman Nicholai and Gesine (Olsen) Jansen. Harold is survived by his wife Patricia and their four children, Daniel, Elizabeth, Nathanael and Mark, as well as his seven grandchildren. Throughout his life, Harold maintained a deep commitment to witnessing which began when he was a teenager. He told many stories about preaching on street corners in Brooklyn. He was also a youth worker at Trinity Lutheran Church in Brooklyn. He obtained a Bachelor of Civil Engineering from City College of New York and continued his studies at Luther Seminary where he obtained his Masters of Divinity. Harold was awarded Doctorates of Divinity from Capital University, Wagner College and Roanoke College. Harold led a brilliant life of service to the communities in which he lived and worked. In the early parts of his career, he was the pastor of Eltingville Lutheran Church for fourteen years. He was instrumental in starting Eltingville Lutheran School, a K to 8 parochial school which recently celebrated 50 years of service to the community. During his time at Eltingville, he collaborated with Franciscan priests to open St. Francis High School, an alternative high school, where he was the Lutheran Ecumenical Director. After his call at Eltingville Lutheran Church, Harold was elected the Dean of the Eastern District of the American Lutheran Church until he was elected in 1978 as the Bishop of the eastern region of the American Lutheran Church. In 1979, Harold and his family moved to the Washington, DC, area where he was the first Bishop of the Washington, DC, Metropolitan Synod of the Evangelical Lutheran Church in America until his retirement in 1987. As Harold has said to each of us many, many times, we now share with him: May the Lord bless you and keep you. May the Lord make his face shine upon you and be gracious unto you. May the Lord lift up his countenance to you and give you peace. Numbers 6:24-26 In lieu of flowers, memorial contributions may be made to Alzheimer's Association https://act.alz.org/site/Donation2?47319.donation=form1&df_id=47319&mfc_pref=T&_ga=2.93229277.1112079626.1609784996-704859160.1609784996

Rev. E. Harold Jansen, Bishop Emeritus, died on January 2nd after a long battle with Alzheimer&#8217;s. Harold was born on August 31, 1930 in Brooklyn and son of Herman Nicholai and Gesine (Olsen) Jansen. Harold is survived by his wife Patricia... View Obituary & Service Information

The family of Rev. E. Harold Jansen created this Life Tributes page to make it easy to share your memories.

Send flowers to the Jansen family.