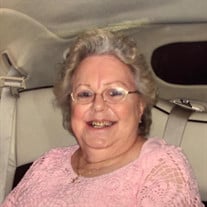 A new angel has arrived in heaven. Doris Blair, 78, of Manassas, VA passed away peacefully in her sleep on February 14, 2022. Born on February 13, 1944, she was the youngest of five children born in Philadelphia, PA to John Redfern Braithwaite, Sr, and Effie Braithwaite. She married Gene Donald Blair of Lebanon, PA in 1963 and immediately moved to Virginia to become a lifelong resident. Doris was a lover of country and gospel music and played her guitar and sang at home and at her church. She was a collector of dolls, angels, and eagles. Her proudest moment was when she received her GED from the state of Virginia in 1986. She was a stay-at-home mom and housewife until 1981, when she entered the healthcare field, first as a live in aid for the elderly, then as a group home counselor until she retired in 2006. She spent her retirement years watching her grandchildren grow and graduate high school and college, and travelled frequently, visiting her friends and family. She never had a cross word to say and was always a cheerful soul! She was predeceased by her husband Gene, her daughter Jean Victoria, her parents John and Effie, her brothers John Redfern (Jack) Braithwaite, Jr and Richard Braithwaite and her sister Harriet Thomas. She is survived by her three sons, Gary Blair of Waldorf, MD married to Lori, Fredrick Blair of Warrenton, VA married to Melissa, and Ken Blair of Centerville, VA., her three grandchildren, Gene Blair of Pasadena, MD, Taylor Blair of Warrenton, VA and Stephen Blair of Warrenton, VA and her brother Allen Braithwaite of Santa Barbara, CA. A visitation will be held on Friday February 25, 2022 from 6:00-8:00 PM at Pierce Funeral Home (9609 Center Street, Manassas, Virginia 20110). A going home Service will be held on Saturday, February 26, 2022 at 10:30 AM, also at Pierce Funeral Home, with inurnment at Stonewall Memory Gardens to follow immediately after.

A new angel has arrived in heaven. Doris Blair, 78, of Manassas, VA passed away peacefully in her sleep on February 14, 2022. Born on February 13, 1944, she was the youngest of five children born in Philadelphia, PA to John Redfern Braithwaite,... View Obituary & Service Information

The family of Doris Blair created this Life Tributes page to make it easy to share your memories.

A new angel has arrived in heaven. Doris Blair, 78, of Manassas,...

Send flowers to the Blair family.