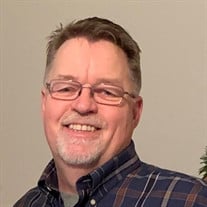 Donald Wayne Fraze, loving husband, father, veteran, and salesman, died peacefully on the morning of September 11th, 2021 at age 58, when his heart succumbed to congestive heart failure. Don is survived by his wife Rose Fraze, his daughters Sasha and Kate Fraze, his sister Patricia Rolley, his sister-in-law Amber Gochoel, his niece Gillian Gochoel, and a host of other nieces, nephews, cousins, and friends. He is predeceased by his mother Sandra Fraze, his father Jerry Fraze, and his brother Jeffrey Fraze. Don was born on November 17th, 1962 in Jeffersonville, Indiana to Jerry Fraze and Sandra Bethke Fraze. He proudly served his country in the Army National Guard and the United States Navy. He then studied at Brescia University in Owensboro, Kentucky where he met the love of his life, Rose Fraze, coached youth basketball, and earned a bachelor’s degree in English coupled with Secondary Education Teaching certification. Shortly thereafter, Don and Rose moved to the Northern Virginia area, where they lived for the rest of his life. They welcomed their daughters Sasha and Katherine into the world on May 10th,1996 and February 20th,1998. More than anything, Don set out to provide for his wife and daughters, and cherished education, humor, and hard work. Don worked as a salesman for both large and small businesses before becoming a proud Snap-On franchisee. He won countless awards for his Snap-On sales prior to his retirement. Don loved baseball, books, animals, country music, history, coffee, tools, and comedy. He instilled his love of superheroes, science-fiction, and sales in his daughter Sasha, and his love of animals, music, and ill-timed jokes in his daughter Kate. He will be remembered forever by his family, friends, and customers, and especially by his two cats Abigail and Olivia. His visitation will be on Monday, September 20th, from 6-8 PM at Pierce Funeral Home in Manassas, VA. A funeral service will be held on Tuesday, September 21st, at 11 AM at Pierce Funeral Home, with an internment for family and close friends at Stonewall Memorial Gardens at noon. Flowers can be sent to Pierce Funeral Home or donations can be made to the Wounded Warrior Project or the ASPCA.

The family of Donald Wayne Fraze created this Life Tributes page to make it easy to share your memories.

Send flowers to the Fraze family.