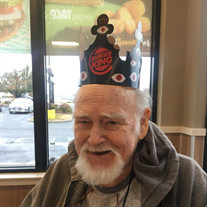 Dennis Wayne Janzen, passed away peacefully at 80 years old on February 22, 2022, at Prince William Hospital, in Manassas, Virginia surrounded by his daughter and son-in-law after a long battle with sickness. Born in Fresno, California on October 22, 1941, to Gustav Cornelius (Gus) Janzen and Amanda Krause. He was the middle child of their three boys. Dennis was raised in Dinuba, California, and spent his early years through college in the California area. In his childhood, Dennis met his future wife Janice Weaver in grade school when he became best friends with her older brother Nathan (Nate) Weaver. He spent the majority of his younger years working in the fields, packing plants, building transistor radios, hiking and driving in the Yosemite mountains with friends. He went to Reedley High School and began dating Nate’s little sister Janice. Later he will make a career out of this love for tinkering by attending the Fresno State University where he received a Master's Degree in Engineering and Mathematics. Dennis and Janice were married on June 16, 1962. In Reedley, California before moving to Delaware for a career opportunity at DuPont. They built their first home and expanded their family with the adoption of their daughter Ginger E (Janzen) Newcomer. Soon after they would move to North Palm Beach, Florida where Dennis and Janice raised Ginger and enjoyed the sunshine, fellowship in a volleyball team, achieving a scuba diving certificate and was photographer and videographer for Ginger’s dance recitals. Among many career accomplishments Dennis finally established a home here in Virginia in 1995 and started his own company D-Star Instruments with a partner here in Manassas where he worked until he retired in 2007 taking care of his wife who was disabled for 8 years. Dennis was a man of faith who grew up in the Mennionite faith and found his home in the Baptist Churches over the years. He was blessed to have two loving church homes locally over the last 20 years. He was a faithful member, deacon, choir singer, and sound man for both Hatcher’s Memorial Baptist Church and Berean Baptist Church. He valued his relationship with Christ and the members of his church family. He is survived by his daughter Ginger E Newcomer and son-in-law Joseph R Newcomer; four grandchildren Brittney Janzen, Brooke Caudle, Macaya Newcomer, and Nathanial Newcomer, who will miss their “Papa” dearly; his sister-in-law Linda Weaver and his three nieces and a one nephew. He is preceded in death by his father, Gustav Cornelius (Gus) Janzen, and his mother Amanda Krause; his older brother Gus Janzen Jr and younger brother Richard Janzen; his best friend Nathan (Nate) Weaver, and his loving wife Janice Janzen with whom he would have been married for 60 years. Over the last several years, Dennis has fought a long battle with many illnesses. In 2011 he was diagnosed with Multiple Myeloma bone cancer just one year after losing his wife to a sudden heart attack. He had to undergo chemotherapy and home treatments in which he overcame and was in remission. After falling ill to phenomena in 2013 and experiencing renal failure he had to undergo HD treatment. He made a difficult decision not to undergo this painful treatment and came home on hospice. Two weeks later our beloved Dennis fought hard and with his faith in God and much prayer he was released from hospice with a blood transfusion in which there were many over the years to fight low hemoglobin levels. Unfortunately he had to begin Hemodialysis again in March 2017 for his failing kidneys and continued to be treated until his death on February 22. We would like to share more of his story as a testament to his strength and undeniable faith that helped him overcome all the adversity that was thrown his way. In January of 2020 Dennis and his family faced a devastating house fire where their family home was destroyed. His youngest grandchildren were brave and saved themselves and Papa as well as family pets to escape their home. Two years of living in a rental and hotels, and facing a global pandemic, Dennis fought through change, sickness, two falls with broken ribs and two skilled nursing facilities stays and finally making it back to his Manassas home with his family in September 2021. After twelve years of sickness and a long hard fight, Dennis was at peace in his passing, knowing that his family was home and taken care of. The family would like to thank everyone who has supported Dennis and family in faith. Dennis will be remembered as a smart, funny, kind godly man, who never gave up on the fight to make sure his family would be content and happy after his passing. Many will remember him for being a dependable source of laughs, with his dry humor, stories that gave inspiration and papa smiles that would light up a room. Dennis' family invites you to pay your respect at his service at Stonewall Memory Gardens on March 5, 2022 at noon where his ashes will be interred. In lieu of flowers, Dennis’s family encourages donations to Hatcher's Memorial Baptist Church.

Dennis Wayne Janzen, passed away peacefully at 80 years old on February 22, 2022, at Prince William Hospital, in Manassas, Virginia surrounded by his daughter and son-in-law after a long battle with sickness. Born in Fresno, California on... View Obituary & Service Information

The family of Dennis Wayne Janzen created this Life Tributes page to make it easy to share your memories.

Dennis Wayne Janzen, passed away peacefully at 80 years old on...

Send flowers to the Janzen family.