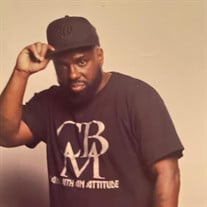 Delontae Albert Clark, known by most as Man, was born February 18, 1978, and passed away suddenly on May 23, 2021. Man was born in Washington, D.C. and lived there for most of his childhood years. He developed a strong passion for music and sports. He moved to Falls Church, VA in 1991, where he attended Longfellow Middle. There he joined the band and played the baritone and joined the football and baseball team at McLean High. Man’s love for music and talent for singing and playing instruments afforded him the opportunity to play in a variety of local Go-Go bands throughout his life. He held various jobs and was currently working for Proctor and Gamble in Martinsburg, WV, but he continued to play with his band CMB on the weekends. He loved playing spades and cracking jokes with anyone around him; no one was safe, and he was hilarious. Man also loved spending time with his family and friends. He enjoyed going to the beach with his wife and kids and taking rides to his hometown to visit his sandbox buddies. He was an avid supporter of the Dallas Cowboys, and he would talk trash whether they won or loss, he was a diehard fan. He would often say that DC stands for Dallas Cowboys. Man was someone special and one of kind. He was a husband, a father, a brother, an uncle, a cousin, and a true friend. He was a precious gem. His love for people, sense of humor, infectious smile and laugh drew many towards him, and he was adored by many. He is preceded in death by his mother Rosa Maxine Clark and his grandparents Albert and Rosetta Lewis. He is survived by his father, Larry D. Joines (wife Theresa Thomas), his wife Tiwana Brooks-Clark, brothers Adonis Cunningham (wife SaCillia), Kelvin Smith, Joseph Little, Alex Joines, Richard Little, Adam Cunningham (wife Jahmilla), sisters Katrice Wingfield Blackette (husband Mario), Sheneka Wilkins, Kita Smith (husband Brandon), and Ashley Cunningham. Four sons Xavion Clark, Da’ron Clark, Darius Clark, and Demarion Clark. Stepchildren DeAnte Lee, Mia Lee, and DeYana Brooks (Chickie) and his beautiful grandson Andre Clark. A niece that was special to him, Lattawan (NuNu) Wingfield, and a host of nieces, nephews, and cousins. Man will be greatly missed by his family, friends, and all that met him.

Delontae Albert Clark, known by most as Man, was born February 18, 1978, and passed away suddenly on May 23, 2021. Man was born in Washington, D.C. and lived there for most of his childhood years. He developed a strong passion for music and... View Obituary & Service Information

The family of Delontae Albert Clark created this Life Tributes page to make it easy to share your memories.

Delontae Albert Clark, known by most as Man, was born February...

Send flowers to the Clark family.