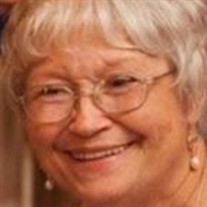 On May 7, 2021 Della Berry Fenner died in Washington, DC of heart failure following neck surgery, she was 76 years old. Della is survived by her husband Billy Fenner; her children, Cathy Johnson (Jon) of Purcellville, Frank Sheen of Manassas, Brian Sheen of Seaford, DE; sister Peggy Bailey of Nokesville, VA, grandchildren Kyla Johnson of Purcellville, VA, Liam and Trianna Sheen of Lovettsville, VA and one great-grandson Jordan Johnson of Sterling, VA. She was preceded in death by her parents Earl Berry and Catherine Golden Berry, brothers William Berry and David Berry, her son Patrick Sheen and grandson Gilbert Johnson. Della was born on July 1, 1944 in Washington, DC. She attended James Madison High School in Vienna . Della worked as a cashier at Giant Food for many years. She was an excellent seamstress, and enjoyed making ceramics, she had an interest in History, especially Virginia history and enjoyed going to historic sites in and around Virginia. She was known for her wacky sense of humor, along with her crazy laugh, love of adventure and very generous nature. She demonstrated compassion for those less fortunate by regularly donating to many charitable causes. A Funeral Liturgy for Della is scheduled for 10 am Monday, May 24th at All Saints Catholic Church, 9300 Stonewall Road, Manassas, VA 20110 . It will be immediately followed by a graveside burial ceremony at Sacred Heart Cemetery, 6430 Token Forest Drive, Manassas, VA 20112. There will be a reception following internment at City Tavern, 9550 Center Street, Manassas, VA 20110

The family of Della Berry Fenner created this Life Tributes page to make it easy to share your memories.

Send flowers to the Fenner family.