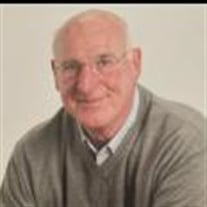 David Lee Isenberg, “Dave”, was born and raised in Huntingdon, PA on October 11th, 1939, to Frederick Hall and Ruth Gillam Isenberg. He was the youngest of 3 children. His older Brother, Fred/Derf/Zeek, passed in 2002. His Older Sister, Rosalind (Rosie) lives in Wellsboro, PA. Dave was in constant motion, personally and professionally. After graduating from Penn State (#WeAre) he was commissioned into the Army and married Maryaline “Penny” Jones Isenberg in the Summer of 1962. They then began a life of travel and adventure. First stop was in Freising, Germany where their daughter, Piper Muoio (Husband - David), was born. After a short move to El Paso, Texas, they landed in Fort Bragg, NC where their son, Tobin (Wife – Dinorah, Children – Caitlyn, Brandon) was born. Dave then received orders to go to Vietnam. Penny headed back to Huntingdon to be close to family and friends. When Dave returned from Vietnam, the family headed back to El Paso for a bit and then relocated to Kaiserslautern and Darmstadt Germany. In 1976, the family returned to the States, living in Springfield, Virginia where Dave retired from the Army in August of 1982 as a Lieutenant Colonel. They built their current home in Manassas, Virginia in 1990. Here they enjoyed spending time with friends and family, especially their grandkids, Caitlyn and Brandon. Dave fully retired from General Dynamics in early 2000. He enjoyed working and we all wondered if it would stick. Penny kept him on his toes with lots of travel. They visited many places in the United States and abroad (Italy & France to name a few). Dave’s last few months were rough, but he never stopped checking in and making sure the family, especially Penny, was okay. In lieu of flowers, the family is requesting your support to honor the veterans of our country who represented us in World War II, the Korean War and the Vietnam War. Friends of the National World War II Memorial - Teaching about Yesterday to Unite us Today (networkforgood.com) GEN RICHARD G STILWELL KOREAN WAR VETERANS MEMORIAL FOUNDATION - Korean War Veterans Memorial Foundation (networkforgood.com) Give to VVMF - Vietnam Veterans Memorial Fund / https://www.vvmf.org/give-to-vvmf/ He will be buried at Arlington Cemetery with full Military honors later this year. Dave cared and loved all of his friends and family, especially his nieces and nephews. There was never a time he did not mention a friend or family in some way in any conversation he had. It is an “Isenberg” trait.

David Lee Isenberg, &#8220;Dave&#8221;, was born and raised in Huntingdon, PA on October 11th, 1939, to Frederick Hall and Ruth Gillam Isenberg. He was the youngest of 3 children. His older Brother, Fred/Derf/Zeek, passed in 2002. His Older... View Obituary & Service Information

The family of David Lee Isenberg created this Life Tributes page to make it easy to share your memories.

David Lee Isenberg, “Dave”, was born and raised in Huntingdon,...

Send flowers to the Isenberg family.