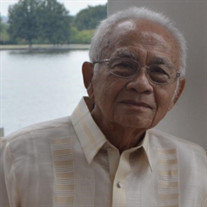 Daniel Recla Policios, 93, of Haymarket, Virginia, passed away on June 15, 2022. He was born on January 4, 1929 in Asturias, Cebu, Philippines to Vicente and Claudia Recla Policios. Daniel was a wonderful cook and was a natural in the kitchen.... View Obituary & Service Information

The family of Daniel Recla Policios created this Life Tributes page to make it easy to share your memories.

Send flowers to the Policios family.