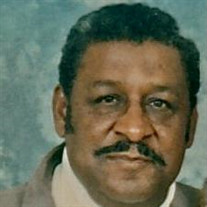 Conrad Nagel Deskins passed away July 16, 2021. He was born January 2, 1932, in Arlington County, VA to Stanley and Jessie Fleet Deskins, the fourth of seven children. He married his beloved Eugenia Balma (Violeta) Deskins in 1956, and began his family in Washington, D.C. The loving couple had three children, Conrad, Lizzette (Te Te), and Edgar (Nunu) and raised five nieces and nephews as their own children, Noel Stockton-Deskins, Edward, Simeon, Nicole, and Holly Johnson. A gifted storyteller, and quick with a good joke, he was an incredible natural athlete and excelled in every sport he attempted. At 16, he attended a Brooklyn Dodgers baseball school in Cambridge, MD and was touted as a potential prospect. Conrad went on to play baseball for the Homestead Grays, pitching and playing outfield in the Negro American League. By 19, he was signed to report to Spring training camp for a tryout by the Boston Braves. Conrad was later drafted into the Army and served with the 30th Infantry. After marriage, Conrad became an avid golfer and fisherman in his leisure time, playing in numerous local amateur tournaments and bringing home numerous trophies. Conrad is preceded in death by his loving wife, Eugenia; brothers; Frederick, Carroll, Arthur, and Edward, stepbrother Michael, and is survived by his sister Audrey Simon and brother Perry Deskins. Conrad is survived by two grandchildren Tyler and Alexis Campbell, son-in-law Steve, eight grand nieces and nephews; Taylor and Edward Deskins, Jonathan and Jyir Bonham, Gabriella and Alexander Deskins, and Caitlin and Caidence Johnson, and a host of other loving nieces, nephews, cousins, and friends Funeral arrangements have been entrusted to Pierce Funeral Home, 9609 Center St., Manassas, VA 20110. The family asks that in lieu of flowers, donations be sent in honor of Conrad Deskins, to Capital Caring Health at www.capitalcaring.org

Conrad Nagel Deskins passed away July 16, 2021. He was born January 2, 1932, in Arlington County, VA to Stanley and Jessie Fleet Deskins, the fourth of seven children. He married his beloved Eugenia Balma (Violeta) Deskins in 1956, and began... View Obituary & Service Information

The family of CONRAD NAGEL DESKINS created this Life Tributes page to make it easy to share your memories.

Send flowers to the DESKINS family.