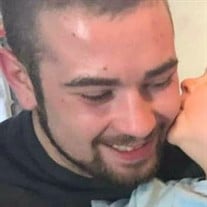 Collin McCormac, was taken home at the tender age of 27 on August 8th, 2021. Born on September 5th, 1993, in Fairfax, VA, he moved to Manassas, VA at 6 months old. He attended All Saints Catholic School from Pre-K through 8th grade. During that time he was very involved in Boy Scouts and played most sports. Collin was also a part of The Squires, an organization led by the Knights of Columbus, which was lead by Dave Riley. Collin regarded Mr. Riley as instrumental in instilling in him the correct way to become a man. Of all the sports he played, Collin had a passionate love for basketball, seemingly from birth, which never left him. Collin moved to Catharpin, VA where he graduated Battlefield High School and was able to be neighbors with both his Godfather (“Uncle Bob”) and his grandmother who he was extremely close with from birth. Several years later, he was able to put this love for her into action in a way very few men would: by helping care for her when she moved into the family home during her final months. Collin preformed a wide range of tasks for her, which many may find humbling, and although she could be ornery at times, Collin never lost sight of the love they shared and was always gentle and patient with his Memaw. Collin has resided in Culpeper since 2016, the same year he was blessed with a son, Marshall. From that moment, Marshall became the focus of Collin’s entire life and his sole motivation. When Collin became a single father, he put his entire attention into raising Marshall and doing everything he could to provide the best life for him that he possibly could. The two adored each other, which was evident to anyone around them. Going on walks and looking for rocks, learning the tricks of riding a tricycle, playing video games, listening to music, playing H.O.R.S.E (where somehow Marshall often ended up with a “do-over), and snuggling were among some of their frequent and favorite activities. Marshall and Collin shared a special handshake and a special bond. Marshall, when asked what he wanted you to know about his daddy, he stated “He was a LEGEND at video games” and “He was a good person and I love him”. A few hours later during nightly prayer, Marshall told God that he didn’t understand why He took daddy, and he was really sad, but he guesses that’s ok, because now daddy gets to do everything you get to do in Heaven. Still, he’d really like it if God could give daddy a phone so they could talk. Collin loved, deeply: as a father, as a son, as a brother, and as a friend. He was always up for a family night with his son, mom, sister and her fiancé, (who, Collin regarded as a brother). In fact, he was often times even lovingly teased for his persistence in organizing these nights, even when others were tired or busy (and let’s face it, that man could sell ice to an Eskimo). Collin was also always ready and willing for a good debate, an opportunity to teach about the evolution of East vs West Coast rap, or to outline a compelling conspiracy theory. He also enjoyed just “being.” His favorite place to do this, and perhaps his favorite place ever (second only to being with his family), was the beach - particularly Ocean Isle, North Carolina. Collin also loved the Washington Redskins, “The Office”, Classic Rock, Rap (he was particularly fond of things from the 90’s and early 2000’s), as well as discussing any of those things. Collin was not a materialistic person; he thought a good life meant providing for his son and spending as much time with him as possible; the rest was gravy. He did not pine over large houses, fast cars, or the like - he was working to build a career that supported him and Marshall, while still allowing enough flexibility to be there every moment he could be with his little boy. Throughout his entire life, Collin always strived to be better. While he often missed the mark, as we all do, he would realize it when he had, get back up, and recommit himself with an intense passion over how he was going to improve a particular aspect of his life or personhood. Collin, quite literally, died trying. Collin is survived by his 5 year old Son, Marshall, Mother, Paula, Sister, Kaitlin, Aunt, Joyce and numerous other aunts, uncles, cousins, and friends, particularly Derek Frankeberger, who Collin also considered a brother.

Collin McCormac, was taken home at the tender age of 27 on August 8th, 2021. Born on September 5th, 1993, in Fairfax, VA, he moved to Manassas, VA at 6 months old. He attended All Saints Catholic School from Pre-K through 8th grade. During that... View Obituary & Service Information

The family of Collin McCormac created this Life Tributes page to make it easy to share your memories.

Collin McCormac, was taken home at the tender age of 27 on August...

Send flowers to the McCormac family.