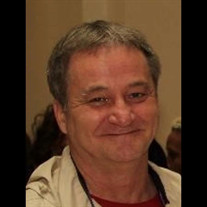 Clinton John Oxenrider, Jr., 63, of Haymarket, Virginia, passed away on August 3, 2021. On August 14, 1957, he was born to Clinton John Oxenrider and Shirley A. (Colley) Oxenrider in Montgomery, Alabama. Clint, or John, known to his family and friends, grew up in Northeastern, PA. His love of learning and quest for knowledge was unquestionable even as a very young child and continued to grow with him, as evidenced by his reading the entire Funk & Wagnalls New Encyclopedia – 29 volumes – at age 14. At the same time, his passion for music, plants, and animals was well underway. John graduated from Central Columbia High School and took time to work, explore, and nurture his many talents and interests, including being the lead singer in a band formed with several of his close friends. John moved to Florida for a few years, living with his Aunt Nita and Uncle Bill (both deceased), where he was inseparable from his late cousin "Tony" Stephen Cheek. While there, he worked as Sommelier and Wine Captain for Walt Disney World on the Empress Lily at Lake Buena Vista before returning to Bloomsburg in 1981. He returned to school, attending Bloomsburg University, and earning his Bachelor of Science degree with a double major (Biology/Pre-Med and Chemistry) and his Master of Science degree in Biology. While studying, he served as an undergraduate lab assistant, graduate teaching assistant, and guest lecturer. John conducted and assisted in numerous research studies and was an active member of the University's concert choir, performing in Japan. John held several jobs, including pharmacy technician at Geisinger Hospital and Pharmhouse Pharmacy, private piano instructor and technician, greenhouse manager at Green Horizon Farm, and adjunct faculty with Luzerne County Community College before relocating to Virginia with his partner in 1994. In 1995, John accepted a position with the National Science Foundation (NSF) as a science assistant in the Biological Sciences Directorate (BIO), marking the start of his career in federal service. In 2001, he transferred to the Budget Division and was promoted to Program Manager in the Program Analysis Branch of the NSF Budget Division, the position he held at the time of his death. In that role, he was the primary liaison between the NSF Budget Division and program office staff across NSF. In addition, he served as the technical expert in budget formulation, providing excellent customer service to client offices and the agency Budget Director. He covered various directorates over the years, including Biological Sciences, Engineering, Social, Behavioral, and Economic Sciences. Most recently, he covered the Directorate for Geosciences, Office of Polar Programs, and US Arctic Research Commission. John was also the resident historian for the Budget Division, paying close attention to essential documents and files kept in the office library. In that capacity, he spent many years working on a historical database that captures NSF funding by scientific topic, inputting and digitizing decades' worth of information from old paper files. John was a voracious reader, science fiction enthusiast, expert botanist, and horticulturist outside of work. He was a lover of nature, wildlife, and his various collections. In addition to gardening and working in his custom-built greenhouse at their new home, John loved spending time with family, friends, and their three cats. John was preceded in death by his father and mother and several other relatives and close friends. He is survived by his partner of 30 years, William J. Matteo; sister Deborah Lehman and spouse, Bob; brother Garry Oxenrider and spouse, Jan; and brother Barry Oxenrider and spouse, Dee, all of Bloomsburg; numerous nieces, nephews, including great-nieces and nephews; aunts, uncles and cousins; and many very dear friends. John's Celebration of Life Service will be held at 2:00 pm on Sunday, August 22, 2021, at Pierce Funeral Home, 9609 Center Street, Manassas, Virginia, 20110, followed immediately by a reception in the Celebration of Life Room. Friends and family will be received at 1:00 pm. Memorial Donations may be made in loving memory of Clinton John Oxenrider, Jr., to The Nature Conservancy 4245 N. Fairfax Drive, Suite 100, Arlington, Virginia 22203. A subsequent Celebration of Life Service will be held for John back home in Pennsylvania at 2:30 pm on Sunday, September 5, 2021 at the Mary Stegmaier Mansion, 156 S Franklin St, Wilkes-Barre, PA 18702. Friends and family will be received at 1:30 pm. A reception will immediately follow the Celebration of Life Service.

The family of Clinton John Oxenrider Jr. created this Life Tributes page to make it easy to share your memories.

Send flowers to the Oxenrider family.