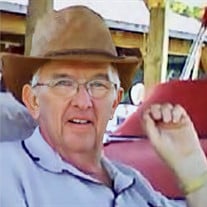 Clarence Elton Martin, 78, of Spotsylvania and formerly of Hillsville and Manassas, passed away at home, peacefully in his sleep on Wednesday August 11, 2021-his birthday. He is survived by his loving wife and partner of 57 years Patricia Ann Mosser Martin and son, Randy Elton Martin and his wife, Sophia Martin; his oldest sister, Elva Martin Mitchell, and numerous nieces and nephews. He was the son of the late Samuel and Mary Largen Martin, and brother to the late Elsie Marie Martin. Clarence spent 28 years as a Glazier with Fairfax County School Board installing and repairing windowpanes throughout the school district. Other employment included working as a carpenter, general handyman, and a tire changer at Firestone Tires. He spent his free time bowling, hunting, and fishing, and showing off his hot cars. Clarence met and fell in love with Patricia at a high school dance in 1964 and they were married 19 years later. He loved his family very much and spent as much time with his son as he could, teaching him how to be a man, how to hunt and fish, and how to love cars just like him. He walked through life with a smile on his face and a positive attitude to match-everyone knew him as ‘Smiley’. The Celebration of Life will be held on Saturday, August 21, 2021, at Pierce Funeral Home, 9609 Center Street, Manassas, Virginia 20110. The family will be receiving visitors at 3pm, the service will begin at 4pm; with a reception to follow. Contributions to honor Clarence’s memory may be made with flowers or a memorial donation to St. Jude Children’s Research Hospital at 501 St. Jude Place, Memphis, Tennessee 38105.

Clarence Elton Martin, 78, of Spotsylvania and formerly of Hillsville and Manassas, passed away at home, peacefully in his sleep on Wednesday August 11, 2021-his birthday. He is survived by his loving wife and partner of 57 years Patricia... View Obituary & Service Information

The family of Clarence Elton Martin created this Life Tributes page to make it easy to share your memories.

Clarence Elton Martin, 78, of Spotsylvania and formerly of Hillsville...

Send flowers to the Martin family.