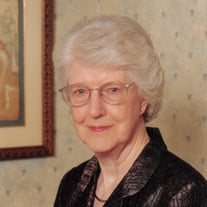 Charlotte Louise (Kunz) Kirsch (Liz), passed away on May 9, 2021, in the Manassas, VA residence that she called home for the last 53 years. She was born September 16, 1926 in Erie, PA, the youngest daughter of the late Anton and Margaret Daniels Kunz. Her marriage to John Mitchell Kirsch (Jack), her childhood sweetheart, on August 9, 1948, lasted almost 73 years until his recent passing on April 22, 2021. During Jack’s 27 year tenure as a Special Agent with the Federal Bureau of Investigation, the Kirsches were stationed in Los Angeles and San Francisco, CA; Washington, DC; Chicago, IL; Pittsburgh, PA; and finally Quantico, VA. It was often up to Mrs. Kirsch to pack up and sell the house and then move her three children to the next location after Jack had been transferred and had gone ahead to his next assignment. She enjoyed reading, jigsaw puzzles, playing card games with friends and family, and working all types of crossword puzzles, especially the weekly puzzle in the Sunday newspaper. An avid bowler, she once rolled a two-game, 400 series as a teenager and competed in bowling leagues in Manassas for many years. Mrs. Kirsch also had a love of baseball based upon her father having pitched in the minor leagues. Mrs. Kirsch enjoyed crafts, sewing and needlework of any kind, excelling in the arts of crewel and needlepoint, creating items of beauty for her home, family and friends. As a homemaker and stay at home mom, she raised her children, loved her husband and was the true heart of the family. She is survived by daughter Gretchen L. Kirsch of Haymarket, VA; son John M. Kirsch, Jr. (Jane) of Fairfax, VA; son Daniel J. Kirsch (Melinda) and twin grandsons Jackson R. Kirsch and Ethan D. Kirsch of Bristow, VA; nephew William A. Storten (Susan) of Erie, PA; and niece Barbara Neuburger (James) of Fairview, PA. Mrs. Kirsch was preceded in death by her older sister, Frances D. Storten, and her brother-in-law, William J. Storten, also of Erie, PA. A private funeral Mass will be held at All Saints Catholic Church on May 21, 2021 at 10:00 am, and will be streamed live at https://youtu.be/pFDG9JxVKrw. Burial at Quantico National Cemetery on Tuesday, June 15, 2021 at 11:00 AM. Expressions of sympathy may be made through donations to the Former Agents of the FBI Foundation for the George A. Zeiss Memorial Scholarship Fund (3717 Fettler Park Drive, Dumfries, VA 22025 or www.socxfbi.org).

Charlotte Louise (Kunz) Kirsch (Liz), passed away on May 9, 2021, in the Manassas, VA residence that she called home for the last 53 years. She was born September 16, 1926 in Erie, PA, the youngest daughter of the late Anton and Margaret Daniels... View Obituary & Service Information

The family of Charlotte Louise Kirsch created this Life Tributes page to make it easy to share your memories.

Send flowers to the Kirsch family.