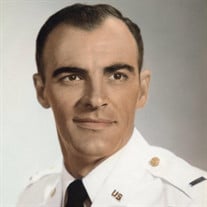 On March 29, 2021, Retired Chief Warrant Officer Charlie (Monty) Milton Montgomery Jr. passed away at his home after a courageous battle with cancer with his loving wife, son and a Hospice nurse by his side. He was a great husband, father, grandfather, and uncle and he will never be forgotten. His resemblance to actor Sean Connery was uncanny from his young age until he passed. So much so that some in Vietnam thought he was Sean Connery! Charlie was born in Meadows of Dan, Virginia in 1934 to parents Charlie and Mary Bell Cox Montgomery. He grew up near the Pilot Mountain area of North Carolina and graduated from Mount Airy High School in 1952. Shortly after graduating, he enlisted in the United States Army and was stationed at Ft. Bragg as a paratrooper and stenographer (he joked that he almost parachuted out of a plane with a desk during Bay of Pigs in 1962). He spent most of his military career as Executive Secretary, Administrative Assistant, or Aide-De-Camp to numerous commanding generals. In his military career, Charlie was the Administrative Assistant to General W. C. Westmoreland from 1963 to 1967 in Vietnam, where he also taught shorthand typing. From 1967 to 1970, he was assigned to the Office of the Staff Judge Advocate Pacific in Hawaii where he was a Tax and Claims Officer. In 1970, he became Aide-de-Camp to Lt. General John Tolson and helped write General Tolson’s monograph on “Airmobility”. Later in 1970, Charlie transferred to Fort Monroe in Hampton VA where he met his wife Bettye Lee Cundiff Crady Montgomery. It was at Ft. Monroe where he was assigned to the task force for Army reorganization. In 1972, he helped General Westmoreland transition from military to civilian life and then retired from the US Army. In his civilian life, Charlie went on to work with Governor West’s Task Force for Economic Development for South Carolina. Later, Charlie worked on General Westmoreland’s campaign to run for Governor of South Carolina. Charlie also enjoyed 52 plus years in his second career working for H&R Block. His early role was as assistant manager of the Charleston, SC offices. He then went on to become the Director of North Georgia Franchise offices until 1986. From 1986 to his “retirement” in 1993, he was Director of Western Kentucky Franchise offices. Never one to rest, after a few months of “retirement”, he became a franchise owner and ran his two H&R Block offices in Dale and Rockport, IN until moving to Dobson, NC in 2003. He would continue working as a Tax Advisor in Mount Airy, NC until 2014 when he and Bettye permanently relocated to be with family in the Manassas, VA area. He continued his work as a Tax Advisor and Enrolled Agent from 2014 to March 17, 2021. Always seeking to learn, Charlie studied at Guilford College, Hampton University, Brecsia University and clocked countless hours of IRS training over the years. As a Vietnam War veteran, Charlie was involved in various organizations including the VFW, American Legion, Lions Club, and the Optimist Club. In his spare time, Charlie loved visiting and talking with numerous family and friends, golf, gardening, and traveling. Each spring he enjoyed planning and planting a full garden – trying his hand at okra, honeybees, and muscadine grapes over the years. Charlie is survived by his wife of nearly 50 years, Bettye, his daughter Kathryn Wall (Joe), his son Charles Timothy (Margaret), his grandchildren Andy, Ashley, Austin, Jessica, Travis, Moira, and Clara, and plenty of great-grandchildren. He is also survived by his younger sister Virginia and nieces Cynthia and Lori, nephew Charles, great-niece Montgomery, and great-nephew Casey. Charlie is preceded in death by his parents, his sisters Jessie and Laura, a brother who died in infancy, his son Kenneth, and his nephew Monty. In lieu of flowers, donations may be made to Capital Caring Hospice, 3180 Fairview Park Drive, Suite 500, Falls Church, VA 22042 or online at http://capitalcaring.org/donate. A memorial service will be announced at a later date.

On March 29, 2021, Retired Chief Warrant Officer Charlie (Monty) Milton Montgomery Jr. passed away at his home after a courageous battle with cancer with his loving wife, son and a Hospice nurse by his side. He was a great husband, father, grandfather,... View Obituary & Service Information

The family of Charlie (Monty) Milton Montgomery Jr. created this Life Tributes page to make it easy to share your memories.

Send flowers to the Montgomery family.