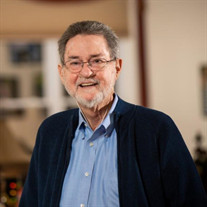 Charles Clifton Stewart passed away peacefully at his home in Haymarket, Virginia on May 29, 2022, at the age of 80. He was loving, caring, generous, but most especially, he was kind; a husband, father, son and brother who was deeply devoted to his family. To know Charles was to love him and he made a positive impact on so many people’s lives. Charles was born on April 22, 1942, in Sprott, Alabama to Charlie and Mae Stewart. He met his wife, best friend and caregiver, Gerri, while working in Atlanta, Georgia and they were married in 1970. They were married for 51 years and had two children: Jason and Jordan. Charles exemplified a strong work ethic. Coming from humble beginnings, he was committed to attending college and graduated from the University of Montevallo with a Business degree, continuing from there to have a very successful 35-year career with the General Services Administration. In God’s mercy, Charles defeated cancer on three separate occasions. It was 19 years ago when Charles was admitted to the hospital for lung damage due to chemotherapy and our family was told by the doctors that they didn’t expect him to survive. But the Lord had different plans and Charles miraculously recovered. This was the start of a journey where, with the loving care of his wife and children, he worked hard to stay with us for as long as he possibly could and significantly longer than any of the doctors thought possible. Through his health struggles, he showed his courage in facing life’s challenges with a smile, a positive attitude, and a quiet faith. Charles was a fighter who was our hero and stayed strong until the very end. Even on his last day, while struggling to breathe, he walked from his favorite chair to his bed where he lay by his wife’s side during his final moments. Charles was a true Southern gentleman who loved fishing, Alabama Crimson Tide football, eating at Waffle House, reading, and working crossword puzzles (with a pen). He also loved spending time with his family, from coaching his children’s soccer teams to taking family vacations and even just sitting around with us watching TV. He also enjoyed sharing his life stories which we loved to hear. Charles had always wanted to visit Scotland and worked through his medical limitations so that in 2009, he and his wife were finally able to take that trip. It will be remembered as one of the favorite moments of his life. For a man who had always put his family first, it was great being able to see him fulfill this dream for himself. We were fortunate to have Charles for as long as we did but it was only through the grace and mercy of God and the love and compassion of his family, friends, and caregivers that we were able to do so. Thank you all. While we all miss him greatly, we are so very happy that he is no longer in pain and can finally breathe comfortably again in Heaven with his Lord and Savior, Jesus Christ. We look forward to seeing him again someday. He is preceded in death by parents, Charlie, and Mae Stewart; brothers Gerald Stewart and James “Jimmy” Stewart; sister-in-law Deanna Stewart; and his feline buddy Leo. Surviving relatives include his wife, Gerri Stewart; son, Jason (Mary) Stewart; daughter, Jordan (Tim) Scheiderer; two granddaughters Mia Wilson and Emerson Scheiderer; brothers Hugh Stewart and Leonard (Mattie Ruth) Stewart; sister Betty Morgan; sister-in-law Nina Stewart and a host of nieces, nephews, and other family members. Family and friends will gather for services at Pierce Funeral Home (9609 Center Street, Manassas, Virginia 20110) on Saturday, June 4, 2022. A viewing will be held at 10 AM, a memorial service at 11AM and followed by a reception in the Celebration Room at the same location. Burial services will be held at Little Georgetown Cemetery (5370 Trapp Branch Road, Broad Run, Virginia) at 2:30PM. In lieu of flowers, please consider a donation in his name to World Vision International: https://www.worldvision.org/donate.

Charles Clifton Stewart passed away peacefully at his home in Haymarket, Virginia on May 29, 2022, at the age of 80. He was loving, caring, generous, but most especially, he was kind; a husband, father, son and brother who was deeply devoted... View Obituary & Service Information

The family of Charles Clifton Stewart created this Life Tributes page to make it easy to share your memories.

Charles Clifton Stewart passed away peacefully at his home in...

Send flowers to the Stewart family.