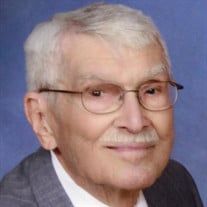 Charles Jarrett Patterson February 14, 1926 – August 10, 2021 It is with deep sorrow that we announce the passing of our beloved Charles Jarrett (Pat) Patterson. He died unexpectedly Tuesday afternoon, August 10, at his home in Manassas, Va. He and his wife were enthusiastically discussing plans for the day as well as the day’s Washington Post. This was a daily ritual Pat thoroughly enjoyed (even if the news portion was not enjoyable). Pat is survived by his adored and loving wife of over 41 years, Diane Elmore Patterson. He also leaves his beloved children from his first marriage; sons Sam and Doug Patterson and daughter Charlene H. Kuykendall. His grandchildren are Dena P. Pyle, Tiffany Patterson, Matthew and Adam Higginbotham. Pat was known as great-granddaddy to Claire, Lucy, Jillian and Bedane Higginbotham as well as Leah and Allison Pyle. All the grands and great-grands were dear to his heart. He was Uncle Bubba to numerous nieces and nephews in the family circles in Alabama, Georgia, Florida, Oklahoma, and California. Charles was a valentine from the day of his birth in Dothan, Alabama. He was the oldest child of Frank A. and Mary Lou Whatley Patterson. His brother, Franklin and sister, Mildred had difficulty saying “brother”. Thus his nickname throughout childhood and in family circles was “Bubba” in sibling-speak. Franklin Patterson and Mildred Patterson Andrews preceded their brother in death. When Pat and Diane Elmore married on January 13, 1980 he became more than an in-law in her family. He was much loved and cared for by all of his new family. Over the more than 41 years of their marriage the many family and extended family bonds of love with Pat grew even stronger. Those grieving Pat’s passing include Diane’s brother Danny and his wife Delma Elmore, their son Brant Elmore and his wife Jaimie. Leighann Elmore was a special niece to Pat. He always told her how proud he was of her and that calling him “Uncle Pat” was his best Valentine Birthday greeting. Pat is also survived by great-nephews Logan and Benjamin Elmore. In 1943 while in high school Charles volunteered for the school military delay program enlisting in the U.S. Army Air Corps. He was called into active service in September of 1944. He had gunnery training on B17s, B24s, and finally as a tail gunner on B29s. He was awaiting assignment to the Pacific theatre when the war ended. Charles was always thankful to “Uncle Harry” for ending World War II. Prior to his honorable discharge in 1946 his duties included running the base newspaper. He was very proud of his 3 ½ years in the U.S. Army Air Corps in service to his country. After military service Charles married Lucy Hartley. They and their 3 children were long-time Alabama residents. Charles and his family were active in The Church of Christ with him taking leadership and lay ministerial duties. He also was known for his beautiful speaking and singing voice. When Charles moved to the Washington, D.C. area he continued his connection with The Church of Christ. After Pat and Diane married and moved to their Manassas home they were active in Emmanuel Baptist Church for many years. They became associated with the Manassas Baptist Church and in the past decade added St. Thomas UMC to their church involvements. The associations and friendships formed in these over 41 years were special to Pat and Diane and they cherished them. Pat’s faith was a constant in his life. Charles appeared destined to become a newspaper man. He began his career in printing and newspapers at the ripe old age of 14. He worked part-time (after school, weekends, and summers) in his dad’s printing shop. That was the beginning of his life-long love of not only the printing process but the power of words well used. Reading was always one of his favorite pass times. Throughout his life he enjoyed learning and was a voracious reader interested in diverse subjects. Charles continued his education at Jefferson State Junior College with an Associate of Science degree in Management-Business. His career in the newspaper business began with his hometown paper, The Dothan Eagle, before he joined The Birmingham News where he spent the major portion of his career. After leaving Birmingham he worked for The Washington Post, The Miami Herald, and then The Washington Times until he retired at age 67. Retirement not being his natural state, Pat started his second career as a volunteer with the Prince William County Hospital Auxiliary. He worked at Annaburg Manor and Prince William Hospital in various labors of love. With more than 27 years of service he was the longest serving volunteer with the auxiliary. He was looking forward to returning to active duty to work with the many dear friends he made there. All who met Pat or knew him recall his kindness, caring, and ability to entertain with stories. He was considered a true example of a southern gentleman. At the hospital everyone called him “Sir Charles”. His wife “Lady Di” notes that he thrived on doing for others and the attention paid to him was a side benefit. Pat did not create a “bucket list” as such, but he had a number of sayings he liked. You can smile with your eyes even if you are wearing a mask. Live as if you would die tomorrow. Learn as if you would live forever. Be grateful. Be of service. Be kind. Know joy in your life. Bring joy to others. Love. Charles Jarrett Patterson - a well-lived life as one of the Greatest Generation and an example of why that generation earned its name. He is missed beyond measure, with love unending, Diane. Thank you to all who are supporting the family with your expressions of sympathy, and most of all, your expressions of love for Pat.

Charles Jarrett Patterson February 14, 1926 &#8211; August 10, 2021 It is with deep sorrow that we announce the passing of our beloved Charles Jarrett (Pat) Patterson. He died unexpectedly Tuesday afternoon, August 10, at his home in Manassas,... View Obituary & Service Information

The family of Charles Jarrett Patterson created this Life Tributes page to make it easy to share your memories.

Send flowers to the Patterson family.