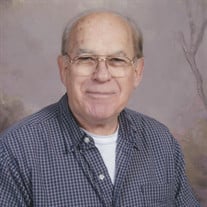 Charles Edward Michael Jr., age 85, passed away peacefully on Friday, April 8, 2022. He was a resident of Manassas, VA, for 20 years and formerly from Nokesville, VA. He was born in Washington DC to the late Charles E. Michael, Sr., and Elsie May Michael, a dairy farmer, and housewife, on December 13, 1936. He is survived by his beloved wife of 65 years, Charlotte Elizabeth Michael, and his two children: son Charles E. Michael, III and wife Darlene; son Chadd E. Michael and wife Christine. He had two grandchildren: Timothy and Shannen, two great-grandchildren, Levi and Holsten, and two great-granddaughters soon to arrive. Charles grew up on a dairy farm and took pride in raising and showing Award-winning dairy cattle; it was an era of his life he often reminisced. The long strenuous days on the farm instilled within him an unsurpassed work ethic that he applied to life. All that knew him understood that nobody worked harder than Charles Michael. Charles’ life was one of national and local community service. He was a devoted member of the Brentsville Presbyterian Church. After graduating from Brentsville District High School In 1955, he joined the Army National Guard, where he served for eight years. In 1958, Charles became a Fairfax County Police officer, retiring in 1979 after 21 years of service. Afterward, he became a Fairfax County Deputy Sheriff, where he retired for a second time after 22 years in that position. Charles enjoyed being outdoors, working with Charlotte in their expansive and beautifully maintained landscape and garden at their Fairfax home. After moving to their Manassas home in 2000, they repeated those efforts with the same beautiful result. He loved riding his Harley Davidson “Hog,” Raising Old English Mastiffs, collecting coins, G-Scale trains, always having a project, and being with his family. Charles was quick to help out a neighbor in need whenever they called. He was known for his kindness, selflessness, and greeting everyone with a friendly smile. He will be dearly missed by all that knew him, especially his family, to whom he was a wonderful husband, father, and grandfather. Funeral services will be held at Brentsville Presbyterian Church, 12305 Bristow Rd., Bristow, VA, on Saturday, April 16 at 11:00 am. Burial service will follow at Fairfax City Cemetery, 15067 Main Street, Fairfax, VA 22030. All are welcome to return to the Brentsville Presbyterian Church for prayers, food, and remembrance.

Charles Edward Michael Jr., age 85, passed away peacefully on Friday, April 8, 2022. He was a resident of Manassas, VA, for 20 years and formerly from Nokesville, VA. He was born in Washington DC to the late Charles E. Michael, Sr., and Elsie... View Obituary & Service Information

The family of Charles Edward Michael Jr. created this Life Tributes page to make it easy to share your memories.

Send flowers to the Michael family.