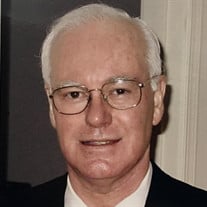 Charles G. Jameson, beloved father, grandfather and husband, passed away surrounded by his wife and dog on February 15, 2022, in Leesburg, Virginia. He was 80 years of age. Born in New York City on December 26, 1941, Charles was the only child of Henry Beecher Jameson and Letitia Graham Jameson. He was married to the love of his life, Dana Banker Jameson on January 19, 1974. He is survived by his wife, his daughter Jean Jameson Ahlberg and grandchildren John William (Jack) Ahlberg, Ryan Jameson Ahlberg, Matthew Steven Ahlberg, and Emma Jameson Ahlberg. Charles grew up on Long Island, in Syosset, New York. He graduated from Friends Academy, in Locust Valley, New York. Having begun his college education at Cornell University, he changed majors to chemistry and graduated from Adelphi University. He pursued a Masters Degree in Nuclear Chemistry at Princeton University and briefly worked at Brookhaven National Laboratory. Charles joined the United States Navy, for the Vietnam War. He was an officer in the Navy, with the rank of Lieutenant at discharge. After leaving the Navy, Charles moved to Northern Virginia to look for employment. After briefly going back on active duty as a reservist, Charles joined the United States federal government, in the Office of the Secretary of Defense, Defense Security Assistance Agency. He met his wife Dana in the Pentagon. Charles worked both in private industry and for the government and retired as Corporate Director of Import and Export Management for Northrop Grumman Corporation. Charles was a Presbyterian elder and sang for several years in the church choir. He had a variety of interests. These included model trains, a 1957 Chevy, 1950’s rock ‘n roll music, writing and playing music on both the piano and guitar, target shooting, and astronomy. Although it was never published, Charles also wrote a novel. His burial will be at Oak Hill Cemetery, in Fredericksburg, Virginia, at 10:00am, on Friday, February 25, 2022. A celebration of his life will be held at 1:00pm, also on February 25th, at Heritage Hunt Golf and Country Club, in Gainesville, Virginia. Refreshments will be served. In lieu of flowers, please send donations to the Alzheimer’s Association. https://act.alz.org/site/Donation2?df_id=32112&32112.donation=form1&utm_source=google&utm_medium=paidsearch&utm_campaign=google_giving&s_src=giving&gclid=Cj0KCQiApL2QBhC8ARIsAGMmKHO2JTOgzA_A95PKSbPgL8LT45cWWUr5FX5OhSwoHvSwRmfstLtPMkaAk8gEALw_wcB

Charles G. Jameson, beloved father, grandfather and husband, passed away surrounded by his wife and dog on February 15, 2022, in Leesburg, Virginia. He was 80 years of age. Born in New York City on December 26, 1941, Charles was the only child... View Obituary & Service Information

The family of Charles G. Jameson created this Life Tributes page to make it easy to share your memories.

Send flowers to the Jameson family.