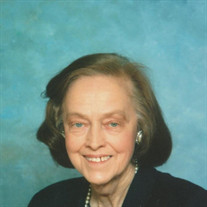 Catherine Price Humphrey, (age 96) died on July 30, 2021, in Alexandria, Virginia. Catherine was born on February 10, 1925, in Waterford, Loudoun County, Virginia, the daughter of the late Harry Alexander Humphrey and Lake Price Humphrey. She was predeceased by her brother, Harry Byrd Humphrey; sister Marion Jeanette Humphrey Yarus, sister Sabra Humphrey Rupe, brothers-in-law, Louis Petersen, Theron Rupe and Howard Yarus. She is survived by two sisters, Elaine Petersen (late Louis), Alexandria, Virginia; and Louise Deml (John), Northport, New York; and many nieces and nephews and great nieces and nephews. Catherine was educated in the public school system of Augusta and Tazewell Counties, Virginia, attending schools in Fishersville until she was a sophomore in high school. She then moved to Tazewell and graduated from Tazewell High School in the Class of 1942. After high school, she attended Marion Junior College, Marion, Virginia; Radford College, Radford, Virginia; and the Lutheran Deaconess Training School, Baltimore, Maryland. Catherine’s employment included Parish Secretary at Luther Place Memorial Lutheran Church, Washington, D.C. and Parish Worker at St. John Evangelical Lutheran Church, Poughkeepsie, New York. She served as secretary to the late Rt. Rev. William H. Marmion, Fourth Bishop of the Episcopal Diocese of Southwest Virginia, Roanoke, Virginia. Catherine later worked as a secretary at Hercules Incorporated, a defense contractor for the Radford Army Ammunition Plant in Radford, Virginia and retired after 22 years of service. Catherine was a faithful Lutheran. She was baptized on November 8, 1936, at St. James Evangelical Lutheran Church, Fishersville, Virginia by the Rev. J. Luther Mauney, D.D. She attended Trinity Evangelical Lutheran Church (formerly Women’s Memorial Lutheran Church) in Pulaski, Virginia and Christ Lutheran in Radford. She has been a participant of the Women of the Evangelical Lutheran Church in America. Catherine also attended services at First United Methodist Church in Pulaski and St. Edward Catholic Church in Pulaski, Virginia. She became a member of Epiphany Lutheran Church when she moved to Alexandria, Virginia. When asked what her life statement would be she said, “I am a Christian, I believe in Jesus Christ who forgives my sins. I believe in the resurrection and in the Apostles Creed.” Catherine loved to attend church, taught generations of children in Sunday school, sang in the choir, and arranged the altar flowers. She said that what she loves the most in the world were her nieces and nephews. Because she kept meticulous records, her nieces and nephews were remembered with a card for birthdays, anniversaries, and holidays all signed with her beautiful cursive handwriting. Besides Catherine’s love for her Lord and for her family, Catherine had four major passions: Pulaski, Virginia; the Dallas Cowboys Football team; chocolate in any form; and McDonalds. Pulaski, was ever present in her thoughts, words, and dreams. She loved the Pulaski County Courthouse, its war monuments and town clock, and was grateful that the town chose to rebuild the Courthouse after being partially damaged by fire. She loved hearing the town clock ring out the hour and half hour peals. She loved the beautiful church buildings. She loved the old train station and longed for the day when passenger service would return. A friend of Milton Brockmeyer, she admired his lifelong effort to recreate the town of Pulaski in miniature with houses, buildings, and model trains. She was pleased when his creation was moved from his basement to the Raymond F. Ratcliffe Memorial Transportation Museum. Catherine took pride in her town of Pulaski, Virginia. In her later years, she often picked up trash, branches, and debris on the streets and swept and raked the Trinity Lutheran Church yard and the apartment building yard where she lived. In 2018 Catherine was awarded the Citizen of the Year Award by the Clean Community Council of Pulaski County for her tireless devotion to the pristine appearance of Pulaski County. Jack Martin of The Southwest Times featured Catherine’s in an article entitled, “Imitating A Hometown Hero.” He considered her a hero for her efforts in keeping Pulaski clean. Despite living deep in Redskin football territory, she bravely cheered for the rival Dallas Cowboys because of her relationship with Jason Witten, a star football player for the Dallas Cowboys. Jason’s grandmother was Catherine’s cousin, and they were good friends. Catherine knew as many stats about the Cowboys as any sports broadcaster. On game day she proudly wrapped up in her Cowboys blanket and cheered her team on while she had her favorite McDonalds cheeseburger, fries, and a chocolate shake (later replaced by a diet coke). A box of chocolates completed the menu. A visitation and funeral service will be held at Epiphany Lutheran Church, Alexandria, Virginia on Wednesday, August 18, 2021. Visitation will be at 1 p.m. followed by a funeral service at 1:30 p.m. Due to Fairfax County Covid restrictions, masks are required inside the church. The service will be live streamed and can be watched at either www.epiphanylutheran.org/watch-now or epiphanylutheran.livecontrol.tv. A graveside burial service will be held at Westview Cemetery, Blacksburg, Virginia, August 19, 2021, at 1:30 p.m. Catherine will be remembered and missed by countless people whose lives she touched through her service to her church and community. In lieu of flowers memorial contributions can be made in her name to Trinity Lutheran Church, 2 Fifth Street NW, Pulaski, Virginia, 24301; Epiphany Lutheran Church, 5521 Old Mill Road, Alexandria, Virginia, 22309; or Lutheran World Relief, P.O. Box 17061, Baltimore, Maryland, 21297-1061.

The family of Catherine Price Humphrey created this Life Tributes page to make it easy to share your memories.

Send flowers to the Humphrey family.