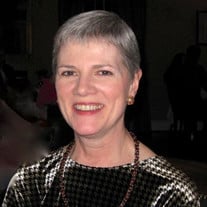 On November 29, 2021, just one day short of her sixty-eighth birthday, Caroline Anne Mallon Harris lost her long battle with congestive heart failure and passed away at home with her husband George and sister Katherine Mallon Johnson by her side. Born in Glen Ridge, New Jersey, on November 30, 1953, the daughter of Edward Vincent Mallon and Anne Louise McGeorge Mallon, Caroline (Carrie to her family and friends) spent her formative years in Montclair, New Jersey. She attended Edgemont Elementary School and Lacordaire Academy before matriculating to Rosemont College, Bryn Mawr, Pennsylvania where she graduated with a Bachelor of Arts Degree in History (Minor in Secondary Education).She moved to Manassas, Virginia in 1976 as the Director of Undergraduate Education for Pepperdine College’s off-campus program at the Marine Corps Base, Quantico, Virginia and to attend the University of Virginia where she completed a Masters of Arts Degree in Education Counseling Psychology. It was here she met her future husband George Stanley Harris who was a Navy officer stationed at Quantico, VA. The year 1978 provided the opportunity for her talents in educational counseling to come to full fruition when she became the first professional educational counselor and founding Director of the Center for Academic Advising at The George Washington University School of Business. Starting as a one-person counseling office, over the next thirty years, she grew the Center for Academic Advising into the gold standard for most every undergraduate program within the university. She assembled what she called her dream team of six professional advisors, two administrative staff and always three or four student workers. It was during this time and while she was recovering from surgery for two vertebral fractures that she wrote a definitive guide for educational counseling. During her tenure as the director of the Advising Center, she became an integral member of various committees within the School of Business and received several awards for her contribution to the mission of the School of Business. Carrie and George were married in their Manassas home in1983 where they lived for the next 38-½ years. They became avid campers in the Blue Ridge Mountains, the Adirondack National Park getting away at every opportunity. Following a tall ship cruise out of Camden, ME they became cabin campers in northern Maine for some 20 years. Hiking, canoeing, and kayaking were their favorite pastimes with Carrie documenting everything with her various cameras and creating beautiful photo albums which were perused by family and friends. Both Carrie and George were avid readers, always checking out numerous books from their local libraries when going on trips and hours of audio books filled driving times. Holidays brought out Carrie's penchant for decorating and bringing folks together for buffets prepared by George. Fine wines and good single malt scotch were among her favorite beverages. She particularly delighted in decorating their Christmas trees with the many ornaments they collected in their travels. To say that her life was all roses would be misleading. Starting with breast cancer in 1996, she had numerous health issues including four heart surgeries and three strokes, after her second stroke, it was thought her mobility would be restricted and her speech would be limited but after three months of intensive speech, physical and occupational therapy, she walked out of the INOVA Mount Vernon Hospital chattering away. After a third stroke in 2019, George asked her how she was able to deal with all the adversities she had faced and with a little smile she replied, “Oh, with a little drop of determination. “And that is how she handled every adverse event. This pluck made her an inspiration to everyone who ever knew her and testimonies to her strength and courage were frequent. Carrie was preceded in death by her parents, Edward Vincent Mallon, and Anne Louise McGeorge Mallon and her sister Margaret Grace, her, stepson Kyle Stanley Harris, step-grandson Utilities man First Class Raymond (Joey) F.J. Luckett III, USN and her nephew Matthew Thomas Johnson. She is survived by her husband George Stanley Harris, her siblings, Edward A. Mallon, Mary Flate (Ray), Katherine M. Johnson (Zachary), William G. Mallon II Betsy), James C. Mallon (Gina), stepchildren Michael Harris (Midori), Shannon Morrow (Kim), Tracey Luckett (Raymond), Kathleen Hairfield (David), and Sean Harris, thirteen grandchildren and five great-grandchildren and numerous nieces and nephews. The family will receive visitors between 6:00PM and 8:00 PM at the Pierce Funeral Home, 9609 Center Street, Manassas, VA on Wednesday, December 15, 2021, and a memorial service will be held at the Pierce Funeral Home chapel at 11:00 AM, Thursday, December 16, 2021, with burial at the Culpeper National Cemetery at 2:00 PM. In lieu flowers, the family requests that you consider donations to the Lacordaire Academy, 155 Lorraine Avenue, Montclair, NJ 07043 in her memory.

On November 29, 2021, just one day short of her sixty-eighth birthday, Caroline Anne Mallon Harris lost her long battle with congestive heart failure and passed away at home with her husband George and sister Katherine Mallon Johnson by her... View Obituary & Service Information

The family of Caroline Mallon Harris created this Life Tributes page to make it easy to share your memories.

Send flowers to the Harris family.