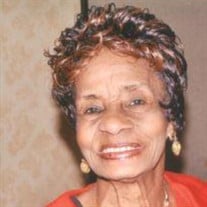 Caroline Clementine Drake-Wallace departed this life on April 13, 2021, at her residence in Manassas, Virginia. She was born on December 10, 1930 in Colon, Republic of Panama and grew up in Rainbow City (Colon). She later emigrated to the United States and settled in Virginia. Her parents were the late Rufus Drake and Gertrude Drake-Wallace. Caroline was preceded in death by her two sisters Florence Drake-Wallace and Eunice Blake, and her brother Sinclair, her daughter Rosa. She is survived by her two younger sisters Elsie Hall and Beatrice Jordan; her three sons Stanley and his wife Carmen; Armando and his wife Gabriela; Federico, her four daughters Jackie and her husband Willie, Lastenia and her husband Rigoberto, Dolores and Sonia, her granddaughters, Lina, Karla, Carol, Lilliana, Camila, Daniela and Lucia, her grandsons, Rogelio, Tonino, Abdiel, David, Danilo, and Deandre who loved her very much and will miss her. Also surviving are a multitude of more grandchildren (9) great-grandchildren (26) and (16) great-great grandchildren, her furry grandbabies Unity and Lil Jose Maria. Caroline (Sylvia) as she was affectionately called loved to sew by hand, cook and was an active Spanish soap opera viewer. She devoted herself to her family. In Panama, she was an active member of the social group “Las Damas Unidas” and also a member of the Eastern Star. In lieu of flowers, memorials may be made to the American Lung Association. All other correspondence may be sent to 9166 Stevens Court, Manassas VA, 20110. To send flowers or a memorial gift to the family of Caroline C. Drake-Wallace, please visit our Sympathy Store.

Caroline Clementine Drake-Wallace departed this life on April 13, 2021, at her residence in Manassas, Virginia. She was born on December 10, 1930 in Colon, Republic of Panama and grew up in Rainbow City (Colon). She later emigrated to the United... View Obituary & Service Information

The family of Caroline Clementine Drake-Wallace created this Life Tributes page to make it easy to share your memories.

Send flowers to the Drake-Wallace family.